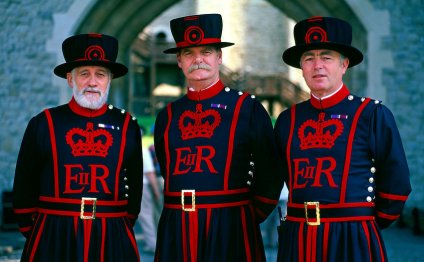 Tower of London Tours with the Beefeaters

The Tower of London is old, very old. The central White Tower was built by William the Conqueror after his invasion of England in 1066. Since 1485, the iconic red and black-uniformed Beefeaters have been guarding the Tower. Also crucial to security are the ravens. Superstition has it that if the ravens leave, the Monarchy will fall. Consequently at least six pampered ravens are kept in residence at all times.

The Beefeaters and their families do continue to live at the Tower, which is like a little village inside. And naturally, there are also ghostly inhabitants: it's no surprise considering there were 119 beheadings (the last in 1747), the mysterious disappearance of the Princes in the Tower, and Henry VIII's dreadful treatment of his wives.

The Tower of London is rich in history and sights, so plan to be here for a good few hours. Recommended are the tours led by a Beefeater - they entertain with stories and facts. For a real taste of history, attend the nightly Ceremony of the Keys. It's crucial to book well ahead for this but you'll see the locking-up ceremony that has continued for 700 years! The nearest tube station is Tower Hill.

Video on topic: Tower of London Tours with the Beefeaters

Moats! the Tower of London Tour with @billybeefeater