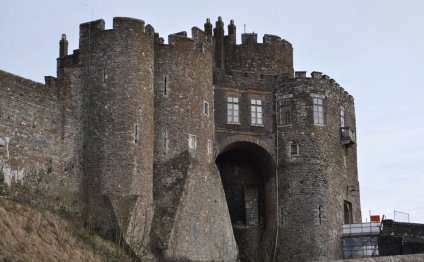 A tower castle is a small castle that mainly consists of a fortified tower or a tower-like structure that is built on natural ground. It is thus different from the motte-and-bailey castle, which it may resemble, but whose main defensive structure is built on a motte or artificial hill. The tower castle is occasionally also described as a tower house castle or a tower house.

Sometimes, during the development of a castle, it might be converted from a tower castle to a motte-and-bailey type, if the initial, ground level site is later remodelled by the construction of an artificial mound for the keep or . The habitable but also fortified tower castle became the permanent private residence of numerous lords during the 11th and 12th centuries.

Since many tower castles had at least a few additional structures such as a curtain wall, often only a few metres long, its overlap with an "ordinary" castle is fluid, as is its transition to the fortified house.