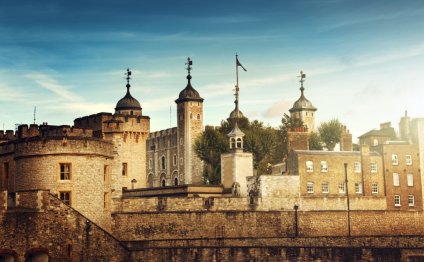 3. The Tower is still officially a royal residence of Her Majesty The Queen. She has a house onsite called ‘The Queen’s House’ (The King’s House when the Monarch’s male), which she could still inhabit if she wished.

4. During WW2, the Tower was used as a Prisoner Of War camp. Rudolf Hess, Deputy Chancellor of Nazi Germany, was imprisoned in the Tower after he attempted to parachute into Scotland. He was found by a Farmer and his mother, where he was looked after before capture. He was placed in what was the King’s House but is now the Queen’s House. He was free to roam the Tower grounds.

5. There are two sentry posts at the Tower of London. One is at the Jewel House, where the Queen’s Guard looks after the Crown Jewels and the other at The Queen’s House. The post at The Queen’s house is a silent post, where the guard doesn’t stamp and make loud noises so as to not disturb the occupants in The Queen’s House. Even when the officer comes out for the inspection, the sentry whispers the reply ‘All’s Well’!

6. The Tower houses the crown jewels and has done for many centuries now. The estimated value of the crown jewels is said to be in excess of £20 billion ($32 billion) with the Star Of Africa alone estimated at £250 million ($400 million) – this is an estimate based on the jewel’s worth as jewels and including their relation to the Monarchy. Their actual value is priceless.

8. Every evening, at precisely 9:53pm, a ceremony takes place to lock the Tower of London – the ceremony of the keys. An armed escort of the Queen’s Guards set off with the Chief Yeoman Warder to lock all the gates. At one point, one sentry at a post issues a challenge to the escort by saying, “HALT!, Who comes there?” to which the Chief Warder replies, “The Keys”, the sentry then says “whose keys?” – the escort then responds “Queen Elizabeth’s Keys”, the sentry then allows the escort to pass by saying “Pass Queen Elizabeth’s Keys, and all is well” – this has happened every day for hundreds of years without fail. It is the oldest military ceremony in the world!

9. The keys were recently stolen from the Tower of London on 6th November 2012 after a lapse in security. Fortunately, the keys weren’t for any of the high-risk buildings or entrances like the Jewel Tower, however the locks were promptly changed and security, increased.

Video on topic: Facts about Tower of London

The Tower Of London poppies – the facts that matter

FACTS ABOUT THE TOWER of LONDON!!!