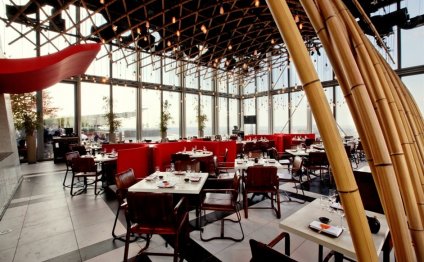 There’s a dedicated entrance for the restaurants in Heron Tower, from where a glass lift will whizz you in seconds up to Duck & Waffle on the 40th floor, or its glitzier sibling Sushisamba two floors below. The views are, as you might expect, stunning – if you’re pointed in the right direction and, preferably, sitting at a window table (many of which are for two diners only). Alternatively, linger in the entrance bar, where you can press your nose against the glass and gawp unhindered. Food is an on-trend mix of small plates, raw offerings (oysters, ceviche) and a few main courses (including roast chicken and the namesake duck confit and waffle). Our dishes ranged widely, from the spot-on (three dense pollock balls in creamy lobster sauce) to bonkers (who thought it a good idea to combine beetroot chunks with watery goat’s curd and sticky knobs of honeycomb crisp?). Prices are as sky-high as the setting; it cost £8 for a harissa-tinged herdwick mutton slider that was undoubtedly tasty, but came unadorned and vanished in a mouthful. Desserts of cold rice pudding, and chocolate brownie sundae, were better (and bigger). Service wavered between keen and offhand. Another downer: all that glass, plus marble and wood tables and a low ceiling (with yellow ‘waffle’ design) mean the acoustics are terrible. D&W is open 24/7, so breakfast or late-night snacks are further possibilities.