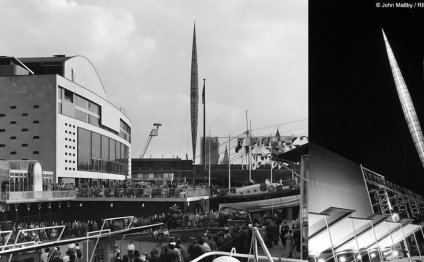 Tensegrity, a term coined by R. Buckminster Fuller as the combination of tensional integrity, is conceptually seen with the Skylon Tower (upper left). By definition, all members are in either uniaxial compression or tension, and no bending moment. The steel spire therefore appeared to be “floating compression, ” a term used by Kenneth Snelson [1].

The tower was made of six cables, three rods, and a large steel piece. The steel piece was vertical, with three cables at the top and three on the bottom. Each top cable paired with a bottom cable to attach to a rod, which held the structure to the ground. The result was a futuristic piece that appeared to float in the air, though it was in fact stable.

The Skylon Tower was designed by Hidalgo Moya and Philip Powell and made structurally possible by Felix Samuely. It was made to be a “Vertical Feature” at the1951 Festival of Britain, and was deconstructed in 1952. Once completed, the base was 15 m (50 ft) from the ground and the top about 90 m (300 ft) high. Structures similar to the Skylon Tower include Snelson’s Needle Tower in Washington, DC, 1968 (upper right) and the Kurilpa Bridge in Australia, 2009 (lower) [2].