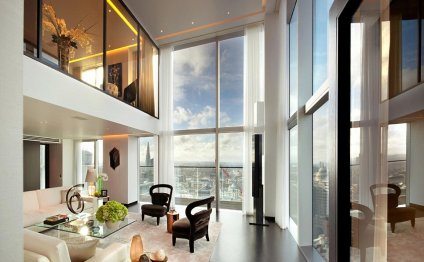 It's never great to arrive at a restaurant ashen-faced and shaking, but for those with a fear of heights, it's a distinct possibility at Duck & Waffle. Forty floors up London's glittering Heron Tower, the place has jaw-dropping views and a delightful atmosphere; it's just that the vertigo sufferer will need a few minutes and a stiff drink to recover from the high-speed journey up in a glass lift.

Luckily a stiff drink at D&W comes in the form of a special yuzu-accented gin and tonic, which does much to put me in the right mood. My more robust friends Russell and Kornelia have glasses of English fizz of the moment Nyetimber (it seems only right, since they're still in the afterglow of their honeymoon).

As they prowl around the floor-to-ceiling wraparound windows, noting everything from Wembley Stadium to the Olympic Park, I feel safer staring down at the menu. Why am I putting myself through the ordeal of a vertigo-inducing venue? Well, Duck & Waffle has been the talk of the foodie town since it opened a fortnight ago; for its location, its rather bonkers eponymous signature dish and for its 24/7 opening hours.

I'm here for dinner as the sun sets. The bar, through which you walk from lift to dining-room, is heaving with City folk, most of whom have their backs to the window. I guess they work if not in this skyscraper, then one of its neighbours, so they don't need to rubber-neck like us.

The room has long, hefty, wooden tables for large groups, and semi-circular banquettes with marble tables for the likes of us. The staff are in blue button-down shirts and appear to have – at this early stage – enough pep to cope with the 3am club kids in search of posh burgers and the 5am power-brokers refuelling on a foie gras all-day breakfast.

London Towers was a professional basketball team based in London, England. They enjoyed some success in the 1990s, collecting…