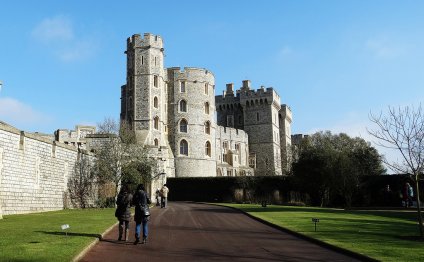 The favourite residence of Her Majesty, Queen Elizabeth II, Windsor Castle is a living piece of history. The oldest continuously inhabited castle in the world, Windsor is built up of an entire complex of buildings, walls, towers and with its’ own chapel. Located on the outskirts of London, visiting Windsor Castle from London is exceptionally easy and makes a fabulous day out for the entire family.

Originally built by William the Conqueror in the 11th century, Windsor Castle has been a primary seat of the royal family ever since. Originally, Windsor was built at this location along the river Thames to overlook the main water-way into London. In the 12th century, the Castle complex was expanded and improved by King Henry II and became a base for King John when he was forced to hide from the population before the eventual signing of Magna Carta – at Runnymede, just near the castle.

King Henry III heavily altered and invested into the Castle and he transformed the royal accommodation rooms into the luxurious and opulent rooms that we would today expect to exist inside a royal castle. Much of the layout of the Castle today is because of Henry’s updates in the mid-13th century.

King Edward III was born at Windsor Castle and used it primarily as his base for the rest of his reign. He is the king who established the Order of the Garter and declared Windsor as its headquarters. Edward spent £51, 000 on his renovations – the largest amount spent by any medieval monarch on a single building operation. When you consider that Edward’s annual income was around £30, 000, it’s easy to see the sheer value he placed on the buildings!

Centuries later, King Henry VI was born at Windsor (and declared Henry of Windsor) and his wife was later held hostage here by King Edward IV during the tumultuous Wars of the Roses. It was this Edward who began the construction of the present St. George’s Chapel in 1475. King Henry VII, eventual and ultimate victor of the Wars of the Roses, completed the Chapel and began using Windsor Castle to host diplomatic events. Ultimately his son, King Henry VIII, who continue additions to the Castle and would eventually come to rest at St. George’s Chapel.

The youngest daughter of King Henry VIII, Queen Elizabeth I, used Windsor Castle as a safe haven for crises as it was considered the most secure of royal strongholds. She often used Windsor to entertain but by the end of her reign, Windsor was considered too small and improvements were required. William Shakespeare makes light of the constant flow of foreign visitors in his work ‘The Merry Wives of Windsor.’

King James I held a drinking session with the Danish King Christian of Denmark IV in 1606 that became known throughout Europe for the scandalous behaviour of the two Kings and James’s son, King Charles I was the one who finally turned an artistic eye to the Castle and added the much needed expansions to the complex. However, all his work was to be undone during the Civil War when the complex was seized by the Parliamentarians and totally ransacked. It is estimated that a total of 3, 580oz – or 101kg – of gold and silver was taken from the Castle at this time. Charles himself would end up buried in the Chapel here – after his public execution in 1649.

After the years of the Commonwealth under Oliver Cromwell, King Charles II was restored to the throne in 1660 and Windsor was the only royal residence he modernised during his 25-year reign – showing the importance of the complex at the time. It was Charles who initially brought in the idea of a French design – mimicking the grand palace of his cousin King Louis XIV of France.

The castle fell out of royal favour during the early Hanoverian reigns but was brought back to the forefront of the royal court by King George III in the mid-18th century. George spent over £150, 000 to modernise and redesign the complex – equal to over £100 million today – and he is to be credited with the park and gardens there today. Near the end of his reign, when the King descended into madness, Windsor Castle became his prison.

A tour of the Great Kitchen lasts 30 minutes, in addition to the standard visit time of two and a half to three hours. All…