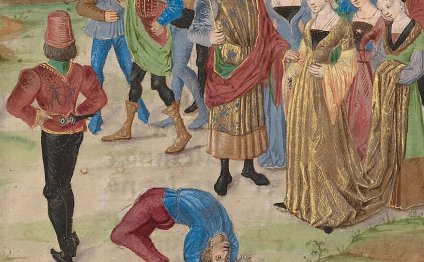 1) They weren’t all knights or serfs or clergy

Although certain medieval writers described their society as divided into 'three orders' – those who prayed, those who fought, and those who laboured – that became an increasingly inaccurate picture from after about 1100.

The population of Europe increased hugely across the 12th and 13th centuries, with cities and towns getting much larger. Paris grew about ten-fold (and London nearly as much) in this period. In the cities, people had all kinds of jobs: merchants, salesmen, carpenters, butchers, weavers, foodsellers, architects, painters, jugglers...

And in the countryside, it was not at all the case that everyone was an impoverished ‘serf’ (that is, ‘unfree’ and tied to the land). Many peasants were free men – and women – and owned their own land, while others who were to some degree ‘unfree’ in fact bought and sold land and goods, much like other free men.

There certainly were poor, oppressed serfs, but it wasn't a universal condition.

2) People had the vote

Well, some people at least. Not a vote for national, representative government – because that really wasn't a medieval thing – but a vote in local politics. In France, in the 12th and 13th centuries and beyond, many towns and villages were run at a local level as a commune, and there were often annual elections for ‘consuls’ and ‘councillors’, where most of the male inhabitants could vote.

A more complex form of election and government was used in the city states of north Italy, with more tiers of elected officials. Women could not usually stand as officials, nor vote, but some of them were noted in the agreed charters of ‘liberties’ that French towns proudly possessed.

The large-scale witch-hunts and collective paranoid response to the stereotype of the evil witch is not a medieval, but rather an early modern phenomenon, found mostly in the 16th and 17th centuries. There were some witch trials in the Middle Ages, and these became more widespread in German-speaking lands in the 15th century, but those doing the prosecuting were almost always civic authorities rather than ecclesiastical ones.

For much of the Middle Ages, the main message that churchmen gave in regard to magic was that it was foolish nonsense that didn't work. When Heinrich Kramer wrote the infamous Malleus Maleficarum in the late 15th century, his motive was to try to persuade people of the reality of witches. In fact, the book was initially condemned by the church, and even in the early 16th century, inquisitors were warned not to believe everything that it said.

4) They had a Renaissance, and invented experimental science

When people talk about ‘the Renaissance’, they usually mean the very self-conscious embrace of classical models in literature, art, architecture and learning found at the end of the Middle Ages. This is usually taken to be one of the ways in which we moved from ‘medieval’ to (early) ‘modern’ ways of thinking.

But in fact, medieval intellectuals also had a ‘renaissance’ of classical learning and rhetoric. This was in the 12th century, and depended particularly on the transmission of works by Aristotle and other classical authors via Arabic philosophers and translators.

One of the outcomes was to prompt an enquiring and reflective approach to the physical world, and it led Roger Bacon (c1214–94), among others, to think about how one might observe and experiment with the physical world to learn more about it.

5) They travelled – and traded – over very long distances

It may be the case that the majority of medieval people – particularly those who lived in the countryside – rarely travelled very far from where they lived. But that would be the case with quite a lot of people in much later ages also.

Even in the early Middle Ages, all kinds of high-status goods were transported from very distant shores to various European lands: silk from China; spices from Asia, brought to Europe via the Middle East; amber and furs from the Baltic. A few intrepid travellers even wrote journals charting their journeys: William of Rubruck’s Journey to the Eastern Parts of the World describes his three-year journey, which began in 1253, through the lands we now know as Ukraine and Russia.

6) They had some great ‘folk’ customs

Much of the public culture of the Middle Ages was shaped, or at least informed by, Christianity. But there were also some quite curious customs, usually tolerated by the church, but which may have had older roots.

One was the practice – found in many different parts of Europe – of rolling burning barrels down a hill on Midsummer’s Eve. Another was to throw wheat over the heads of a newly married couple. It was also common to raise money for charity by holding a ‘help ale’: brewing up a batch of ale, having a big party to drink it, and collecting donations.