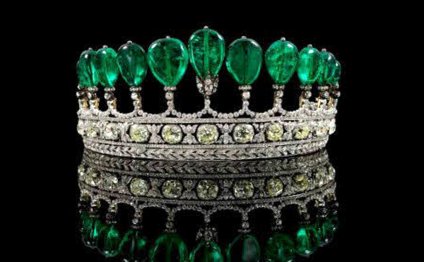 “To my knowledge it will be the first time the Lily Font has left London, ” he said, “and hopefully it will come back in one piece!

“We have had a travelling case constructed for it, to keep things rock solid when it is moved. I can’t say how it will be moved though.”

Princess Charlotte will be christened at 4.30pm in the church of St Mary Magdalene on the Sandringham estate, where her late grandmother Diana, Princess of Wales was also christened and where the Royal family worship on Christmas Day every year.

Thousands of members of the public are expected to turn out to see Princess Charlotte after the Duke and Duchess arranged for a paddock next to the church to be opened for the occasion.

Fewer than 30 people will attend the service; alongside the Duke and Duchess, Princess Charlotte and Prince George will be the Queen, the Duke of Edinburgh, the Prince of Wales and the Duchess of Cornwall. Michael, Carole, Pippa and James Middleton will represent the Duchess’s side of the family.

Princess Charlotte will be christened at St Mary Magdalene Church, on the Sandringham est Norfolk

The godparents and their spouses, whose names will be announced this morning, will also be there, and Prince George’s nanny Maria Borrallo is expected to attend in a working capacity.

One person who will not be there is Prince Harry, who has not been chosen as a godparent and is on a three-month visit to Africa. His cousins, Princesses Beatrice and Eugenie, are the bookies’ favourites to be given godparent roles.

After the service the guests will retire to Sandringham for an afternoon tea hosted by the Queen and official photographs taken by Mario Testino.

But as they arrive and leave the church they will be swamped by good will messages from the public, who will mass behind rope barriers for a rare chance to take part in a royal christening, which are almost always held in royal palaces away from public view.

Like her brother Prince George, Princess Charlotte will wear a replica of a christening robe made in 1841 and used in more than 60 royal baptisms since. The original was retired in 2004 but an exact copy was made from silk and Honiton lace.

The official portrait for the christening of Prince George of Cambridge, photographed in The Morning Room at Clarence House

Tradition will loom large over the christening, which will be conducted by the Archbishop of Canterbury.

The Lily Font, which was also used for the christening of Prince George, Princes William and Harry, the Prince of Wales and the Queen, has been used for the baptisms of almost every royal baby since it was commissioned by Queen Victoria in 1840.

Victoria paid £401 10s to have it made because she did not want her children to be christened in the same font that was used for the illegitimate children of Charles II.

Made of solid gilded sterling silver, it weighs more than 21lbs (10kg) and stands 17in high (43cm). The bowl is a large, open lily bloom, hence its name, and it is decorated with lilies, ivy and cherubs. It is only used for royal children who are entitled to an HRH title.

The ewer from which the water will be poured – sourced from the river where Christ was baptised – was made in 1735 for the christening of George III. It is a tulip-shaped pitcher with a handle topped by a figure of Hercules holding a large club and slaying the hydra, the second of his 12 labours, created to symbolise the triumph of Christian virtue over vice.

Mr Swift said the two items had needed no more than a quick dust before they were ready to leave for Norfolk.

“All of the Crown Jewels are given a thorough clean once a year, ” he said. “It’s a fiddly job done with jewellers’ polishing cloths and cotton buds, and the only additional thing we have to do with the font is clean up any water marks after the baptism.”

Royal London at the Jewellery Show 2013