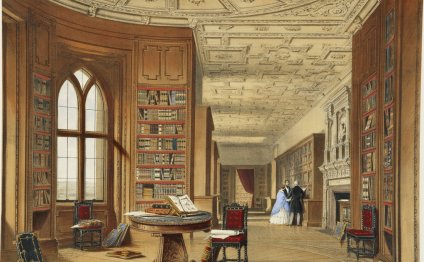 Although the majority of the volumes are printed books of the 18th, 19th and 20th centuries, the Royal Library contains a small but important group of illuminated manuscripts, the best-known of which is the early 15th-century Sobieski Hours. There is also a fine group of incunabula, the earliest and rarest Western printed books, dating from the period before 1500. These include the Mainz Psalter of 1457, the second book ever to be printed with movable metal type.

The Royal Library also contains literary manuscripts of various authors, including Poets Laureate, and a small number of music manuscripts. (The old Royal Music Library is now part of the British Library.) Personal and political documents relating to the monarchy from the reign of George III onwards are held separately by the Royal Archives at Windsor Castle. However, the Royal Library contains a small group of Sovereigns’ manuscripts dating from the 16th and 17th centuries. Smallest in every sense are the library books in Queen Mary’s Dolls’ House, over 200 miniature manuscript volumes by the most famous authors of the 1920s, often in their own handwriting, and embellished with a bookplate designed by E.H. Shepard.

Among the printed books, the chief subject areas are royal and political biography, natural history, heraldry, genealogy, travel, topography and religious books. New material continues to be added (either by gift or by purchase), largely in the above-mentioned areas.

Coins, banknotes and commemorative medals, amounting to some 4, 000 items, are also the responsibility of the Royal Library section. Most of the coins and medals date from the reign of Queen Victoria onwards, following the transfer of George III’s collection to the British Museum in 1823. Examples of early English coins include items from the Cuerdale, Swinton and Tutbury hoards, found on Duchy of Lancaster lands during the 19th century. Among more recent rarities are the specimen set of coins for the reign of King Edward VIII, and early prototypes of the decimal coinage in the 1960s.

The first Royal Library, enriched by successive monarchs from the earliest times – but particularly in the 15th century, by Edward IV – was presented in 1757 to the newly established British Museum by George II. This collection is known as the Old Royal Library and is chiefly located today at the British Library. George II’s grandson and successor, George III, a noted bibliophile, created his own library at Buckingham House (later Palace). Known as the King’s Library, this collection of over 65, 000 books was given to the British Museum by George IV in 1823 and still forms a separate entity within today’s British Library. At the time of the gift, a small but important group of volumes was retained for royal ownership. These books from George III’s library, together with many of George IV’s books, have since been joined in the Royal Library by a number of fine books from earlier royal libraries, following dispersals of duplicates from the British Museum’s collections in the late 18th and 19th centuries.

RCMP at their Windsor stables 1957 Beulah_Library_Roll_F4-2

For your convenience, materials may be returned to any branch of the Windsor Public Library. There are after hours drop boxes…