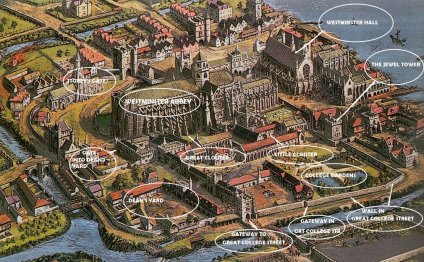 Tudor London was the largest city in Western Europe during the time of the Tudor monarchs. The London of Henry VIII and Elizabeth I was dirty and potentially dangerous, but it still acted like a magnet attracting many people to it who wanted to find their fame and especially their fortune there.

London was a city of great contrasts. On the old London Bridge could be found fashionable houses of wealthy merchants and shops selling their expensive wares. But at one end of the bridge, the so-called Bridge Gate, would be displayed the rotting heads of those men beheaded for treason and similar crimes. The rich tended to travel by boat for two reasons:

1) London was full of small, narrow and crowded streets. Traveling along them if you had money was dangerous as at that time London did not have a police service and many poor would be very keen to take your money off of you if you were wealthy.

2) Streets that were narrow were also difficult to actually travel along. Traveling by boat was simply quicker than traveling by foot.

London was full of entertainment in Tudor times. Bear baiting could be found in the city. The theatres were popular and full on most nights. Like today, London had many inns and alehouses throughout it and drinking was as popular then as it is today!

London was also the most important trading city in Tudor England. Many ships lined the banks of the River Thames, ready to off-load their goods or to export goods to Europe. The writer Thomas Platter wrote:

“Ocean craft run in here in great numbers, as it is a safe harbour. I myself saw one large ship after another over the whole city’s length, from St. Catherine’s suburb to the Bridge, some hundred vessels in all.”

“They (merchants) buy, sell and trade in all the corners of the globe, for which purpose the water serves them well, since ships from France, the Netherlands, Germany and other countries dock in this city. There are also many wealthy merchants, moneychangers and bankers in this city. Some of them sell expensive goods, while others deal only in money or wholesale goods.”

The Exchange, where the prices were set for many commodities, including wool, was in the heart of the City. It could accommodate about 200 merchants who gathered at about 11.00 in the morning and traded until about 6.00 when the Exchange shut for the day.

For all their wealth, those merchants who lived in London had to live with the filth that gathered in the city. The ever increasing population and the lack of a structured sewage system, meant that all waste was simply dumped into the River Thames. As it was a tidal river, it acted like a natural sewer, but it was only a matter of time before London was hit by a major plague epidemic, as happened in 1665. However, disease was an ever-present problem and the sheer everyday presence of dirt and rats meant that even the wealthy could fall prey to disease. However, the rich did have one way of combating disease – they could leave the city if a major outbreak threatened the city.

Fire was also a great fear. Tudor London was effectively a wooden city and the fact that the city escaped a major fire disaster under the Tudors was mainly due to good luck rather than anything else – luck that deserted London in 1666.

Punishment for those who committed crime was harsh. Those who made the law based their beliefs on what they felt was simple logic: