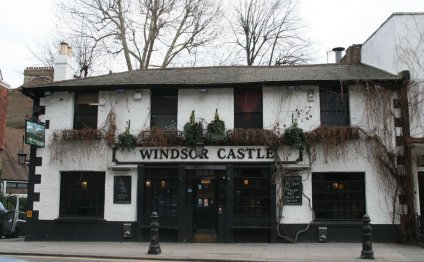 The Windsor is an ancient inn, and thankfully a 2013 refurb was sympathetic to its many charms. It’s clad in aged wood the brown of Princess Anne’s saddle; still intact are decorative wooden screens installed by the Victorians to separate the sexes while they got sloshed. Between the compartments are doors so tiny they might have been made for those the height of Charles I – who, as Monty Python noted, started his reign at five foot six and ended it four foot eight.

It offers a better sort of pub grub befitting the area; whether it’s good enough to tempt the Duke and Duchess of Cambridge to make the short stroll from Kensington Palace, I’m not sure. But when it comes to the drinks, Harry would surely enjoy a tear-up in this Castle, where he could get stuck into the well-kept and interesting real ales, including Harviestoun’s black-as-a-royal-raven Old Engine Oil. And the idyllic and modernised garden will do a fine trade in Pimm’s on sunny days.