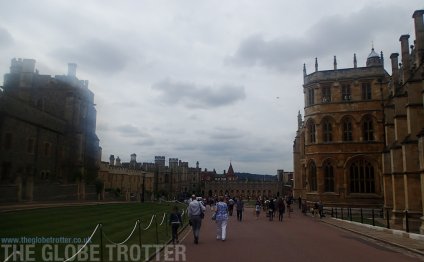 Windsor Castle, which has been the family home of British Kings and Queen's for over 900 years, is an historic castle, Royal Palace and a family home that is open to visitors.

Looming over the town and surrounding countryside Windsor Castle is the oldest and largest continuously inhabited castle in the world and one of the Queen's three official residences.

Since the 11th century, the castle has been home to 39 monarchs who have shaped the building into what is reputed to be 'The Queen's' favourite official residence.

As well as the home where 'The Queen' spends most weekends Windsor Castle is very much a working royal palace which is regularly used for ceremonial and State occasion.

Windsor Castle opens to the public daily, including Sunday, at 09:45. The times of the differs, depending on the time of year.

Should you want to leave during your visit for refreshments, in the town, you can get a re-entry permit from the castle shops or audio return point.

The State Apartments furnished with treasures from the Royal Collection.
Such are the treasures that you can perhaps look at an obscure painting only to realise that your are inches from an original Rubens when looking at the information on it.

St George's Chapel, one of the most beautiful ecclesiastical buildings in England, which is the burial place of 10 monarchs and the spiritual home of the, the oldest order of chivalry in the world.

Worshippers are able to attend the Sunday services at St George's Chapel but the chapel is closed to general visitors on Sundays.

Queen Mary's Dolls House, an exquisite palace in miniature filled with the work of the finest artists and artisans, craftsmen and manufacturers of early 20th-century Britain.

Five feet tall, this priceless miniature palace, has cars including a Rolls-Royce Silver Ghost in the garage, original works by Arthur Conan Doyle and Rudyard Kipling, and exquisite miniature furniture all in a perfectly preserved piece of history whose tiny rooms give visitors a glimpse into a bygone age.

The Drawings Gallery exhibition, which until the 9 June 2013 is:
'The Queen: Portraits of a Monarch'
Shows how Her Majesty The Queen has been portrayed by some of our most accomplished artists and photographers during her reign.

During the winter months an additional five rooms, known collectively as the Semi-State Rooms, are included in the visitor route.

Despite soaking the crumbling structure in 4, 500 tons of water, nine rooms were completely gutted and nearly 100 suffered significant damage, by what remains the worst blaze in the castle’s 900-year history.

Members of the Royal Family, including the Queen and Prince Andrew, were reported to have joined a ‘human chain’ tasked with saving great works of art from the wreckage.

A Restoration Committee, headed by the Duke of Edinburgh and the Prince of Wales, was set up to oversee the work.

The committee decided that certain principle rooms destroyed by the fire - the Grand Reception Room, the State Dining Room, and two Drawing Rooms - should be restored to their former state.

The restoration of the State Apartments brings alive how the original rooms would have looked and have arguably improved the visitor experience.

Collect your handset and listen to Horace, a timeless tutor, and Tommy, his pupil, who are your guides. They introduce you…