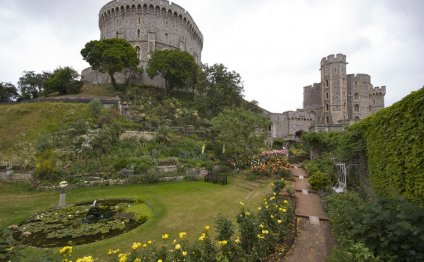 Highlights include the exotic mature trees such as redwoods and tulip trees that can be found around the lake.

The gardens were first laid out in the 1790s when George III bought the house for Queen Charlotte in 1792.

The 4, 000 shrubs and trees were planted to create a model “picturesque” landscape and features such as a Gothic Ruin were added with a design by Queen Charlotte’s daughter, Princess Elizabeth.

Additions made during Queen Victoria and Queen Mary's reigns can be seen today, with Queen Mary redesigning the gardens to include numerous flowering trees, shrubs and grasses, and some 200, 000 bulbs.

Trees and shrubs presented during Queen Elizabeth's Silver Jubilee in 1977 were also planted in the garden, and there are gentle walks around the the 18th-century lake and to see Queen Victoria's Tea House, a white-marble Indian Kiosk.

Frogmore is no longer an occupied royal residence but is frequently used by the Royal Family for private entertaining.

Its principal room is decorated to look like an arbour open to the skies.

Frogmore House and Garden are open on June 2, 3 and 4 in aid of the National Gardens Scheme, NSPCC and The Thames Valley And Chiltern Air Ambulance Trust respectively. It is also open to the public on August 25, 26 and 27.

Windsor Castle is one of three official residences of The Queen and has been home to the Sovereign for over 900 years. The…