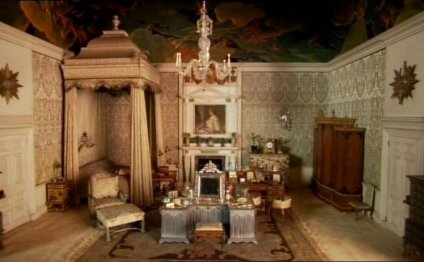 the largest, most beautiful and most famous dolls’ house in the world. Built for Queen Mary by the leading British architect Sir Edwin Lutyens between 1921 and 1924, this most magical of residences is a perfect replica in miniature of an aristocratic home.

The house is filled with thousands of objects made by leading artists, designers and craftsmen, nearly all on the tiny scale of 1:12. From life below stairs to the high-society setting of the saloon and dining room, no detail was forgotten. Among the most striking features of Queen Mary’s Dolls’ House are the library, bursting with original works by the top literary names of the day, a fully stocked wine cellar and a garden created by Gertrude Jekyll. The Dolls’ House even includes electricity, running hot and cold water, working lifts and flushing lavatories.

In the adjoining display two remarkable French dolls, France and Marianne, are shown with part of their extensive wardrobe of clothes and accessories. They were presented to King George VI and Queen Elizabeth for their daughters, the Princesses Elizabeth and Margaret Rose, by the French Government during the 1938 State Visit to France. The dolls’ clothes and accessories were designed and made by the leading Parisian fashion houses, including Worth, Lanvin, Cartier, Hermès and Vuitton.

Pigs might fly? Well, we haven t seen any yet but we did spot some pink elephants on the roof of this fantastic pub located…