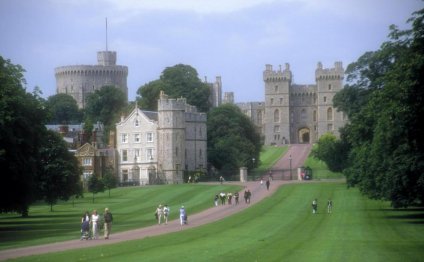 Runs Tuesdays and Fridays only April to October.

There is a free hotel collection from strategically placed hotels in all of the main central London hotel districts.

Separate coaches each cover a main Central London hotel district and transport you to Victoria Coach Station where you join the tour bus for your day tour. The hotel pick-ups are performed between around 7:30 a.m and 8:15 a.m.

The Windsor, Stonehenge and Bath itinerary is the most popular itinerary for a day tour from London that visits Windsor Castle. There are several tours every day of the year including Christmas Day when Windsor Castle isn't even open!.

Although the basic itinerary of 2 hours at Windsor, just under 2 hours at Stonehenge and 75-90 minutes at Bath is fairly constant there are tweaks to this format between the tours available.

All but the International Friends small group tours have the visit to Stonehenge after Windsor Castle, arriving around lunch time or late afternoon depending on season.

The International Tours Small Group tour has Stonehenge as the first stop and is normally the first tour bus to arrive at Stonehenge from London each morning. Windsor being the last stop of the day.

The standard full size bus tours typically use around a 50 seat touring coach to operate their tours. It's a long day whatever Windsor, Stonehenge and Bath tour you travel on and there is little time to linger.

The standard large bus tour as well as visiting Windsor, Bath & Stonehenge tour makes an additional lunch stop at Lacock. This routing offers some very nice English countryside and time in a very nice village off the beaten tourist track with lunch in a 14th century historic village pub.

Hampton Court & Windsor Castle are only 19 miles (30 kms) apart but there is no convenient public transport option connecting them.

Both Windsor Castle and Hampton Court have train links from Central London and in 2016 a shuttle service has started connecting both together allowing you to spend half a day at each.

To Groups can enjoy an exclusive ‘behind-the-ropes’ experience in the Castle’s magnificent State Apartments. Starting when…