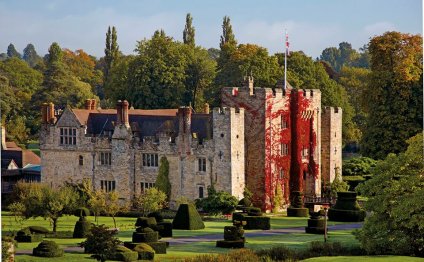 Over a million people visit the castle each year. Jimmy Carter, Ronald Reagan and Bill Clinton have all been guests of the queen at the palace.

Hampton Court
Located a few miles from London, along the River Thames, this prestigious 1, 000-room palace was once occupied by Henry the VIII, famous for having 6 wives and beheading 2 of them. Wife no. 5 was 15-year-old Katherine Howard. Accused of adultery, Howard was imprisoned but later escaped. She was caught and then tried for treason. When Howard was brought back to Hampton Court after trying to escape, she was dragged through a gallery that's now called the Haunted Gallery. Outside Hampton Court the grounds are brought to life by 60 acres filled with gardens, spectacular views of the River Thames, and a famous maze that has confused visitors for over 300 years.

Edinburgh Castle
Located 400 miles north of London is one of the most visited cities in Europe, Edinburgh, Scotland. Through sieges, invasions, power struggles, murder and imprisonment, Edinburgh Castle has withstood the test of time.

The castle is now the protector and safe-keeper of the Scottish crown jewels. The 500-year-old crown, sword and scepter were used at the coronations of the kings and queens of Scotland. Along with the crown jewels, the castle was the keeper of the clock. Every day for 150 years at 1 p.m. a loud gun would fire, signaling the correct time to sailors at sea and to the locals, because so many people couldn't afford a watch.

Visitors to Edinburgh Castle can see the dungeons used to incarcerate thousands of prisoners over the years. To show the real conditions back then, wax models are positioned throughout the dungeon.

St. Michael's Mount
Located roughly 600 miles south of London, St. Michael's Mount is connected to the mainland by a causeway. At high tide the mount is cut off from the village of Marazion. For many years and continuing today, Marazion has served as a great escape for the inhabitants of the mount, who sometimes crave a warm meal and a drink or 2.

Travelers have been visiting this rocky island since the 5th century, when legend has it the archangel Michael appeared to a group of people over the mount. A Benedictine monastery was later built there in the 12th century. Each year believers make the pilgrimage to the mount, where they walk up the ancient Pilgrims' Steps to the monastery at the top of the hill.

Stirling Castle
Stirling Castle, situated 450 miles from London, is a well-known symbol of Scotland. Just outside the walls of Stirling stands a monument to Scotland's great national hero, William Wallace, who led a small army against the English king, Edward I, at the Battle of Stirling Bridge in 1297. Seven hundred-plus years later, the memorial for Wallace continues to remind people of the victory at Stirling.

Among the 8 centuries of battles and murders at Stirling, something very positive and enlightening did occur at this castle - one of the first attempts at flight. Roughly 500 years ago, during the reign of King James IV in Scotland, scientist John Damian announced he would fly from Stirling Castle to France. Assembling strips of wood, chicken feathers and glue, Damian performed his brief flight by jumping off a stone wall and then gracefully flew straight down, dropping like a stone.

Leeds Castle
At 900 years old, Leeds Castle sits 30 miles from central London. It was the home of Henry the VIII. Despite its British location, Leeds Castle has many American connections. Two families who owned the castle also owned large tracts of land in Culpepper and Fairfax, VA. Today, the castle's connection to the United States continues.

Video on topic: Castles of London

Near Tower of London

Best Available Rate Guarantee assures you receive the best rates when you book directly with us. If you find a lower publicly…