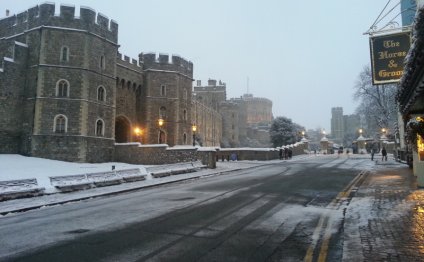 The early history of the site is unknown, although it was almost certainly settled some years before 1070 when William the Conqueror had a timber motte and bailey castle constructed. The focus of royal interest at that time was not the castle, however, but a small riverside settlement about 3 miles (5 km) downstream, possibly established from the 7th century.

Windsor, or Windlesora as it was called in the 11th century, is first mentioned in the . The name originates from old English Windles-ore, or 'winch by the riverside'. The settlement had used an earlier name, but this is unknown. From about the 8th century, high status people started to visit the site occasionally, and possibly this included royalty. From the 11th century the site's link with king Edward the Confessor is documented, but again, information about his use of the place is scant. After the Conquest of 1066 royal use of the site increased, probably because it offered good access to woodlands and opportunities for hunting – a sport which also practised military skills. By the late 12th century, and the relocation of the royal household to an enlarged castle in 1110, the site was renamed Old Windsor.

Windsor Castle is noted in the Domesday Book under the entry for Clewer, the neighbouring manor to Windsor. Although this might seem strange, it occurred because plans for the castle had changed since 1070, and more land had been acquired in Clewer on which to site a castle town. This plan was not actioned until the early 12th century. By 1110, meetings of the Great Council, which had previously taken place at Windlesora, were noted as taking place at the Castle – referred to as New Windsor, probably to indicate that it was a two ward castle/borough complex, similar to other early castle designs, such as Denbigh. Henry I – according to one chronicle – had rebuilt it, and this followed the Norman kings' actions at other royal sites, such as Westminster, where larger and more magnificent accommodation was thought necessary for the new dynasty. King Henry married his second wife at Windsor Castle in 1121, after the White Ship disaster. The settlement at Old Windsor largely transferred to New Windsor during the 12th century, although substantial planning and setting out of the new town (including the parish church, marketplace, bridge, hermitage and leper hospital) did not take place until c. 1170, under Henry II, following the civil war of Stephen's reign. At about the same time, the present upper ward of the castle was rebuilt in stone. Windsor Bridge is the earliest bridge on the Thames between Staines and Reading, built at a time when bridge building was rare; it was first documented in 1191, but had probably been built, according to the Pipe rolls, in 1173. It played an important part in the national road system, linking London with Reading and Winchester, but also, by diverting traffic into the new town, it underpinned the success of its fledgling economy.