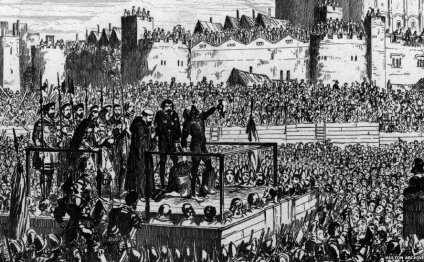 There were no police during the Tudor times. However, laws were harsh and wrongdoing was severely punished. In Tudor times the punishments were very, very cruel. People believed if a criminal’s punishment was severe and painful enough, the act would not be repeated and others would deter from crime as well.

A public execution was an event not to be missed and people would queue through the night to get the best places. There was always a carnival atmosphere and pie sellers, ale merchants and producers of execution memorabilia did a good trade.

How many people were executed (put to death) during the reign of Henry VIII?

Some 70, 000 people suffered the death penalty during the reign of Henry VIII.

Punishment used during Tudor times,
if someone broke the law