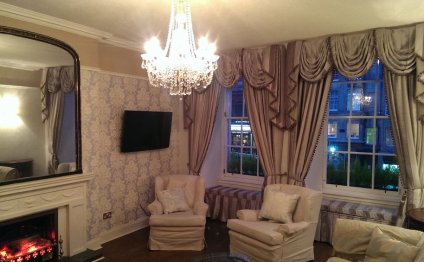 Windsor Castle has been the home of 39 monarchs, and the appearance of the State Apartments today reflects the changing tastes of the Castle’s royal occupants, particularly Charles II (r.1660-85) and George IV (r.1820-30).

Charles II set out to rival the achievements of his cousin, Louis XIV, at Versailles in France. He modernised the Castle’s interiors, which became the grandest State Apartments in England, with painted ceilings by Antonio Verrio and carvings by Grinling Gibbons.

With his architect Sir Jeffry Wyatville, George IV gave the State Apartments a new grand entrance and staircase, and he added the colossal Waterloo Chamber, celebrating the defeat of Napoleon Bonaparte in 1815, introduced in the short film below by Desmond Shawe-Taylor, Surveyor of The Queen's Pictures.

The State Apartments are furnished with some of the finest works of art from the Royal Collection, including paintings by Rembrandt, Rubens and Canaletto. Many of the works of art are still in the historic settings for which they were first collected or commissioned by the Kings and Queens who have lived at Windsor.

On 20 November 1992 a fire destroyed or damaged more than 100 rooms at the Castle. Four thousand gallons of water a minute were used against the blaze at the fire’s height, the equivalent of the entire weight of Niagara Falls descending on the Castle for two seconds. The restoration of the Castle, particularly St George’s Hall and the Grand Reception Room, is a testament to the extraordinary skills of some of the finest craftsmen in Europe.

Today Windsor's State Apartments are frequently used by members of the Royal Family for events in support of organisations of which they are patrons.

2015 marks the 200th anniversary of the Battle of Waterloo and the defeat of Napoleon. In celebration of the allied victory…