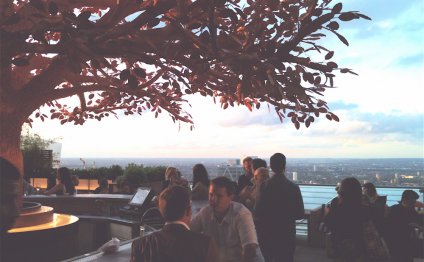 Sushisamba’s glass-walled express lift hurtles up the outside of Heron Tower, taking you 38 storeys above the City in under 30 seconds until you’re level with the tip of the Gherkin. Once you're up there, Sushisamba also has a pretty impressive rooftop bar open all year round (it's occasionally closed to the public for private parties though, so call to check in advance). Expect to be competing with crowds like Rio Carnival on sunny days. It’s less sequins and more suits up here, but you’ll still spot bling aplenty.

The terrace’s point of focus is a tree sculpture with pretty orange leaves that sparkle when lit up after sunset. A circular bar snakes round it, although it remains unmanned on colder days and you’ll have to make do with ordering at either of two bars indoors. It’s a blessing this suntrap is so prettily turned out, since the view from this side of the Heron Tower isn’t much to shout from the rooftops about.

Visit the interior bar on floor 39 and you’ll be able to take in views that extend towards the Thames and far beyond, as well as a close-up of the Gherkin that you could never tire of. Posers invariably fight for window-side seats in an ungracious fashion – views of this calibre can attract big heads as well as big wallets.

We can’t help but feel attitude from bar staff too, who made a simple order of bar snacks seem like such an imposition that we gave up on it altogether. They mix a mean drink, though; a short list of signature drinks at £13 each includes a take on the caipirinha, namely the kaffir lime leaf-infused kaffirinha, and a refreshing and fruity nashi martini, more intense on lychee and plum wine than pear-flavoured vodka. If you’re happy to persevere with bar snacks, you can sample the Brazilian-Japanese fusion food the restaurant is known for.

The season of al fresco is upon us once more, and though we all enjoy basking on outdoor tables on cobbled backstreets, there’s…