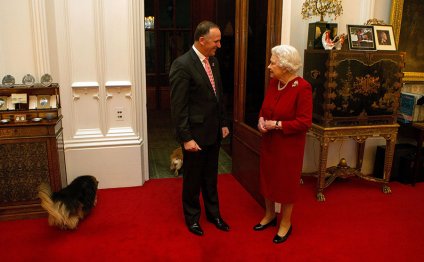 The Queen’s 60-year reign is celebrated in pictures in a special Diamond Jubilee exhibition at Windsor Castle. The Queen: 60 Photographs for 60 Years includes the work of leading press photographers and presents a portrait of her reign as captured in fleeting moments on official occasions and at relaxed family gatherings.

Taken around the United Kingdom, some of the photographs show The Queen’s personal involvement in the life of the nation through her many regional visits. Others document trips overseas, including a visit to Mexico in 1975, to the Solomon Islands and Tuvalu in 1982, India in 1983 and to Canada in 2010.

Every year Her Majesty carries out hundreds of duties as Head of State, Head of the Commonwealth, Supreme Governor of the Church of England, Head of the British Armed Forces, and Patron of around 600 charities. The exhibition includes images of The Queen at the State Opening of Parliament, leading the nation on Remembrance Day, in the Garter Day procession at Windsor, hosting Heads of State and carrying out the Investiture of The Prince of Wales in 1969.

Over the past 60 years photographers have also recorded The Queen pursuing her personal interests in off-duty moments, particularly her life-long love of equestrianism. In an image from 1957 Her Majesty leads in her filly Carrozza, after winning the Oaks race at Epsom. In two photographs from the 1960s The Queen and members of the Royal Family are seen watching competitors at Badminton Horse Trials, and in 1962 Her Majesty was captured photographing the action herself.

The Queen’s love of animals is well documented in the exhibition. On 25 January 1959 Her Majesty is working at her desk with a corgi at her feet; in August 1974 she arrives at Aberdeen Airport with several of her dogs for the start of her holiday at Balmoral in Scotland; and in May 1998 The Queen is reunited with Watney, one of the dorgis she has bred.

The exhibition The Queen: 60 Photographs for 60 Years is part of a visit to Windsor Castle from 4 February until 28 October 2011.

Pics of Princess Beatrice and Princess Eugenie - Easter at ...