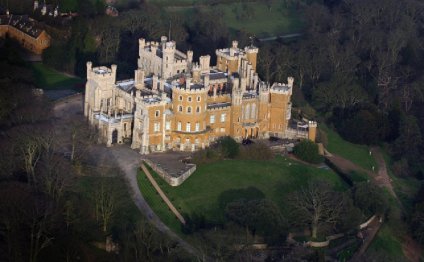 Just over an hour on the train from London, Hever Castle is a double-moated castle that was once the home of Henry VIII’s second wife, Anne Bolelyn. That isn’t the only reason you should visit Hever Castle though; it’s also home to 3 floors of antiques, prayer books belonging to Anne Bolelyn, and a collection of Tudor portraits that, according to David Starkey, are regarded as ‘one of the best collections of Tudor portraits after the National Portrait Gallery.’

The Castle itself is set in 125 acres of gardens which include 3 (yes, 3!) mazes to get lost in: a yew tree maze which was planted in 1904, a water maze where the idea is to get to the centre without getting wet, and a tower maze which can be found in the children’s adventure playground.

Also on offer are archery lessons, shield painting, and jousting.

Fancy a day out in Kent? Leeds Castle is easily accessible from London Victoria in around 2 hours. Dating from the 19th Century, the castle’s set in 500 acres of beautiful parkland and has a range of year-round activities, including 2 playgrounds, falconry displays, a dog collar museum (yes, really), segway tours, and obviously the castle itself which was once the home of Henry VIII and his first wife Catherine of Aragon.

A visit to Leeds Castle wouldn’t be complete without getting lost in its maze and you’ll be rewarded for your efforts with an amazing grotto at the finish. And if The Androids of Tara is your favourite Doctor Who episode, stick this place on your ‘must visit’ list because it was filmed right here at Leeds Castle!

Highclere Castle is most famous for being one of the filming locations for popular British period drama series Downton Abbey. Series creator Julian Fellowes even had the castle in mind when he wrote it! However, there’s lots more to see at this traditional Victorian castle set in a huge 5, 000 acre estate in West Berkshire.

Video on topic: Castles Around London

A walk around the Elephant and Castle shopping centre London