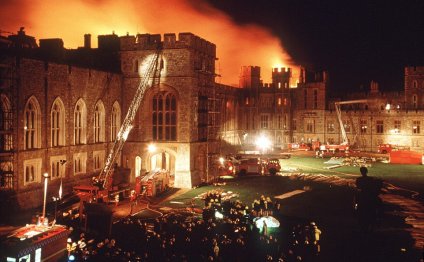 On November 20th 1992 just before midday, television news programmes were suddenly putting up news flashes, saying that the 900 year old Windsor Castle was on fire. Before long, images of Windsor Castle well alight was accompanying these news flashes.

A fire had began at 11.33am in the Queens Private Chapel, when the radiated heat from a 1000 watt halogen spotlight left too close to curtains by a painter, set on fire. The fire set off an alarm in the watchroom of the castles own fire brigade. The Castle had 20 of its own firefighters, six of which were full time. They were equipped with a Land Rover and pump tender, and were based in the Royal Mews, which was to the south of the castle.

The location of the fire was shown on a map of the castle and indicated by an illuminated indicator light. Immediately the Chief Officer (Mr. Smith) of the castles fire brigade sounded the public fire alarm, and then paged the other firemen who were routinely patrolling the castles ground, and informed them of the incident. At 11.37 he then telephoned the Royal Berkshire Fire and Rescue Service via a direct line informing them of a fire alarm actuating.

The fire was shown initially to be in the Brunswick Tower, but soon many other indicator bulbs lit up, as the fire spread to neighbouring rooms, including the State Apartments. Once he had informed all the necessary persons, he made his way to the Brunswick Tower where he found a serious fire in progress. He initiated immediate salvage operations to put into action by members of staff from the castle.

Prince Andrew, who was at the castle, was one of those who assisted removing these valuable items. These salvage operations had been planned previously due to the priceless works of art and furniture kept within the castle. Thanks to these early operations, very few of these items were damaged during the fire.

Within 7 – 8 minutes of the call, (by 11.45am) the first of the appliances from the Royal Berkshire Fire and Rescue Service had arrived. Within another 4 minutes 10 pumping appliances were in attendance, and the fire was now blazing out of control.

The officer in charge on the fireground of this historic fire was Deputy Chief Officer David Harper, who reported directly to Chief Officer Garth Scotford who based himself at the Royal Berkshire Fire Control rooms in Reading. The spread of the fire was rapid, and by 12.20pm the fire had spread to the largest of the State Apartments, St. Georges Hall, and was getting worse.

It was decided that one way to help stop the spread of the fire, was by using tradesmen to erect firebreaks. These were erected at the southern wall of the Green Drawing Room (at the end of St George’s Hall on the east side of the Quadrangle), and at the north west corner at Chester Tower, where that tower joins the Grand Corridor. The time was now 1.30pm. By this time, firefighters had started to gain the upper hand on the fire, but the roof of the State Apartments was now showing signs of collapse.

At 3.30pm, with the fire now surrounded the floors in the Brunswick Tower collapsed. This collapse was accompanied by large volumes of smoke. This smoke caused confusion for a short time as firefighters were thought to be lost within the fires area, but they were soon located.

At 4.15pm, as night fell, flames in the Brunswick Tower flared up once more, and by 6.30pm, the flames, now well over 50 feet above the tower could be seen illuminating the night sky for miles around. Images of this were seen worldwide as 24 hour news programmes followed the incident.

The roof of the Brunswick Tower finally gave up its fight against the flames at 7.00pm, as the flames broke through into the night sky, accompanied by a spectacular shower of sparks rising high into the night. This was followed soon after by the collapse of the roof over St. Georges Hall

Nine hours after the start of the fire it was brought under control, but it was to take another three hours to extinguish it. Firefighters would continue to damp down small pockets of fire well into the next day, and 8 appliances would remain at the scene for many more days.

Firefighters used over one million gallons (4, 500 tons) of water fighting the fire. This was taken from Castle mains and from the River Thames. Nine principal rooms and over 100 other rooms over an area of 9, 000 square metres were damaged or destroyed by the fire. This was approximately one fifth of the castles area.

The day following the fire, the Queen visited the castle to personally thank many of those who had tirelessly worked to prevent this tragedy being far worse.

The restoration of Windsor Castle began immediately following the devastating fire, it took 5 years and cost £37, 000, 000

Changing of The Guard at Windsor Castle, Berkshire, England