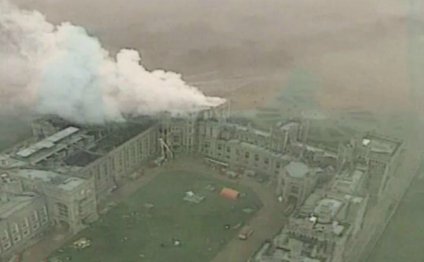 A fierce fire is raging through Windsor Castle in Berkshire, threatening one of the world's greatest collections of art.

The Queen and the Duke of York have been helping to rescue priceless works from the royal residence, as 200 firefighters attempt to fight the flames.

One of the world's greatest collections of art is threatened by the flames and the Queen and the Duke of York have been helping to rescue priceless works from the royal residence.

The fire started at 1100 GMT in a private chapel on the first floor of the north-east wing and has caused damage which will cost millions to repair.

The fire brigade has not yet established how it started, but police have said they do not suspect arson.

The blaze spread quickly from the chapel, badly damaging St George's Hall, which is often used for banquets, and the state apartments.

It then moved north and took hold in the Brunswick Tower, which has been completely ruined.

The Duke of York - who was in the castle when the fire started - said the Queen was devastated by the damage.

He also told reporters he was horrified at how fast the blaze had spread.

"I heard the fire alarm and some two or three minutes later when I came out of the room I was in, you could see the smoke, " he said.

Prince Andrew later joined the human chain removing valuable - and sometimes priceless - works of art from the castle before they were destroyed.

It is thought the bulk of the collection has now been saved, but the Royal Family and locals alike have been shocked by the ferocity of the blaze.

Ridin on a Pony, by Fire and Water. Windsor Castle pub.

On November 20th 1992 just before midday, television news programmes were suddenly putting up news flashes, saying that the…