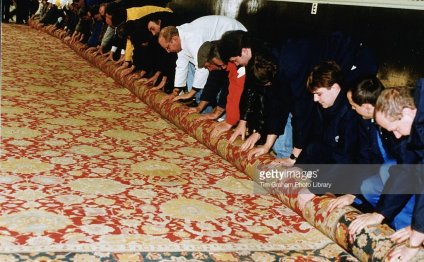 The 1992 Windsor Castle fire occurred on 20 November 1992 in Windsor Castle, the largest inhabited castle in the world and one of the official residences of Queen Elizabeth II. The castle suffered extensive damage in the fire, and was fully repaired within the next few years at a cost of £36.5 million (equivalent to £67 million as of 2015), in a project led by the conservation architects, Donald Insall Associates. It led to Buckingham Palace, the Queen's other official residence, being opened to the public to help pay for the restoration work.

The fire began in the Queen's Private Chapel at 11:15 in the morning when a curtain was ignited by a spotlight pressed up against it. Agents of the Royal Household were in the chapel at the time inspecting works of art. A fire alarm went off in the watch room of the castle fire brigade, manned by the Chief Fire Officer, Marshall Smith. The location of the fire was shown by a light on a grid-map of the castle. Initially, the Brunswick Tower was lit up, but lights soon began to flash indicating that the fire had quickly spread to neighbouring rooms.

A major part of the State Apartments was soon ablaze. Building contractors working in a nearby room attempted to tackle the blaze using fire extinguishers. The 30-foot (9 m) long curtains eventually dropped to the floor and continued to burn, while those present hurriedly began removing paintings from the chapel, until the intense heat and raining embers forced them to leave at 11:32.

At 11:36, Mr Smith pressed a switch to alert the control room at Reading fire station. He then activated the public fire alarm in the castle and telephoned the Royal Berkshire Fire and Rescue Service on a direct line, giving the message, "Windsor Castle here; we have got a fire in the Private Chapel. Come to the Quadrangle as arranged".

The castle still had its own twenty-strong fire brigade, of whom six were full-time. Equipped with a Land Rover and pump tender, they were based in stables two miles south of the castle, and arrived on the scene at 11:41. Appliances from the Fire and Rescue Service arrived at 11:44. By 11:56, 17 pumping appliances had been ordered. An operation to save furniture and works of art involving castle staff, building contractors and the Queen's son, Prince Andrew, had commenced in rooms adjacent to the fire.

By 12:12, there were 20 fire engines, and by 12:20 there were 35, with over 200 firemen from London, Buckinghamshire, Surrey and Oxfordshire, as well as from Berkshire. The Fire Incident Commander was David Harper, Deputy Chief Fire and Rescue Officer of the Fire and Rescue Service. The Chief Officer, Garth Scotford, was out of the country, on holiday.

By 12:20, the fire had spread to St George's Hall, a banqueting hall and the largest of the State Apartments. The number of fire appliances totalled 39 and 225 fire-fighters were in attendance. Hoses were directed at all levels of the building surrounding the fire. As an indication of the scale of the fire, there had been just one 30-appliance fire in the whole of Greater London since 1973.

By 13:30, fire breaks had been created by tradesmen at the southern wall of the Green Drawing Room (at the end of St George's Hall on the east side of the Quadrangle), and at the north-west corner at Chester Tower, where that tower joins the Grand Corridor. The fire-fighters had by this time started to bring the fire under control, though the roof of the State Apartments had begun to collapse.

At 15:30, the floors of the Brunswick Tower collapsed. Firemen had to temporarily withdraw to locate three men who were briefly lost in the smoke, and withdrew again because men were temporarily unaccounted for when part of the roof collapsed.

At 19:00, the roof of St George's Hall finally collapsed.

By 20:00, the fire was under control, having burned for nine hours, although it continued to burn for another three hours.

By 23:00, the main fire was extinguished, and by 02:30, the last secondary fires were extinguished. Pockets of fire remained until the early hours of the morning, some 15 hours after it began. Sixty firemen with eight appliances remained on duty for several more days. The fire had spread rapidly due to the large cavities and voids in the roof. 1.5 million gallons (7 million litres) of water from the mains water supply, a reservoir-fed hydrant, a swimming pool, a pond, and the nearby River Thames had been used to fight the fire.

The Queen was informed about the fire by a phone call from Prince Andrew, who had been in the mews across the Quadrangle from the State Apartments doing research work for his course at Staff College, Camberley when the fire broke out. She arrived at 15:00 and stayed at the castle for an hour, returning again the following morning to inspect the damage. The Prince of Wales visited the castle in the evening, and Prince Andrew briefed the press at 15:00, telling reporters that Her Majesty was devastated.

Apart from the several hundred firemen directly involved in the fire-fight, staff and tradesmen helped the castle's fire brigade and volunteer salvage corps move furniture and works of art from the endangered apartments, including a 150-foot (46 m) long table and a 120-foot (37 m) long carpet from the Waterloo Chamber, to the safety of the castle's riding school. It was an enormous operation: 300 clocks, a collection of miniatures, thousands of valuable books and historic manuscripts, and old Master drawings from the Royal Library were saved. On fire officers' instructions, heavy chests and tables were left behind. All other items were placed on giant sheets of tarpaulin in the North Terrace and Quadrangle, and the police called in dozens of removal vans from a large part of the home counties to transport items to other parts of the castle.

Members of the Royal Household, including the Earl of Airlie, assisted in the operation. The Royal Collection Department were especially active, including the Director, Sir Geoffrey de Bellaigue, the Surveyor of Pictures, Christopher Lloyd, the Deputy Surveyor of the Queen's Works of Art, Hugh Roberts, the Curator of Print Room, Mrs Roberts, and the librarian, Oliver Everett. The Household Cavalry arrived from nearby Combermere Barracks. Some 100 officers and men of the Life Guards proved invaluable for moving bulky items. In all, 125 castle staff, 125 contractors, 100 military personnel and 20 Crown Estate staff were involved in the salvage operation.

Extent of damage to the castle[edit]

A smaller copy of George III and the Prince of Wales Reviewing Troops, a large painting destroyed in the fire

There had been no serious injuries and no deaths. Dean Lansdale, a decorator in the Private Chapel, was burnt while removing pictures, of which he rescued three. He was moved to the royal surgery and then to hospital. Christopher Lloyd, the Surveyor of the Queen's Pictures, suffered a suspected heart attack, and five firemen were taken to hospital, two with hypothermia and three with minor burns and dust in their eyes.

Windsor Castle in England - Trave Around the World - Best ...

The Great Fire of Windsor Castle

Windsor Castle - After the Fire

On November 20th 1992 just before midday, television news programmes were suddenly putting up news flashes, saying that the…