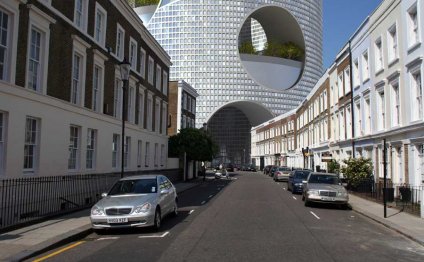 The developers, Aroland Holdings, are seeking permission to erect a 304m (997ft) building, just a few meters shy of the 309m Shard on south of the Thames, which would dwarf 22 Bishopsgate - the stalled Pinnacle scheme.

An image of the stalled Pinnacle scheme which was to be called the Helter Skelter in the middle of the picture.

Mr Kuok owns the Aviva building and site with his fellow Wilmar board member, and Chinese Indonesian businessman, Martua Sitorus.

The architect, Eric Parry, is thought to be leading the project, having recently finished the Green Properties office building at St James’s Square which achieved record rents for the area in April.

However, one property expert said that the plans will spark fresh controversy over the cluster of skyscrapers springing up in the City.

It may also prove difficult to achieve planning consent as 22 Bishopsgate was originally set to be 307m but was later scaled down to 288m, following concerns from the Civil Aviation Authority.

“Eric Parry is a very well regarded architect but the plans will cause a stir, ” said a source.

He claimed it would cause people to worry about the London skyline and the impact on the Tower of London.

The computer-generated images of Number One, Undershaft, have been compared to Canary Wharf’s One Canada Square, only much taller.

One Canada Square in Canary Wharf.

A spokesperson for Aroland Holdings confirmed that they are developing plans for a new project on the site and said: "It is important that our plans for a new tower on the site are right and we are taking our time to ensure the building showcases the very best of British architecture while also creating the City of London's finest and most sustainable offices."

Royal Ravens Get New Perch at Tower of London

A man needs a 5, -gallon aquarium like a fish needs a bicycle, but that isn’t going to put off a vastly overpaid footballer…