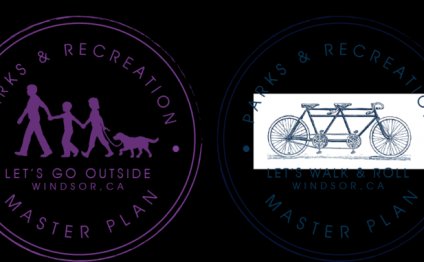 Across Matchette Road lies Malden Park, a former city dump-turned-park, with a huge 300-foot (90 m) hill, providing viewers with a spectacular view of the Windsor and Detroit skylines, as well as sights of the River Rouge and Zug Island factories. On a clear day, one can even see the Enrico Fermi Nuclear Generating Station and the office towers of Southfield, Michigan far off in the distance. Fireworks are also launched from the hill at times during the year. Malden Park also contains a couple small artificial lakes, a restroom, many woodland trails, and war memorials, tributing Canada's brave soldiers during both World Wars.

Close to Malden Park, is the large inter-connected park system that is the Ojibway Prairie Complex, popularly known as "Ojibway". The largest of the parks is the Ojibway Prairie Provincial Nature Reserve, which is not a city-maintained park, but a provincially maintained one. It is connected via the bike trails (such as the West Windsor Recreationway) to neighbouring Ojibway Park and Spring Garden Natural Area. Although some city maps display Titcombe Road as a street that goes through, connecting Matchette Road to the west, and Malden Road to the east, it actually was abandoned in the 1960s, and is now a bike trail, ending at two parks and parking lots.

In the Sandwich Towne neighbourhood, the Parks and Rec. department maintains two medium-sized parks, the Mill Street Park (complete with windmill and pier), and the Chewett Beach Park (McKee Park), just west of the Ambassador Bridge. The beach at Chewett Beach/McKee Park used to allow swimming until recently, when it was completely redesigned, keeping only the small boardwalk and boat launch. Swimming was strongly recommended against, due to the pollution of the Detroit River and currents caused by passing ships.

Section of the Riverwalk, Windsor

This collection of parks is now one park, but at one time was several that blended seamlessly together. It goes by many nicknames, such as "Riverwalk", "Riverfront Park" and the "Riverside Park". The parks were gradually converted from numerous rail yards into one long connected park, 3 miles (4.8 km) long, from the foot of the Ambassador Bridge, to Hiram Walker's Canadian Club distillery. The vast majority of the park allows people to fish along its edge. Caution must be taken while riding a bicycle along the Riverwalk trail, due to young children, crowds of people walking, people walking dogs on the bike paths, occasional sharp curves of the bike trail, and the large amount of Canadian geese and other migratory birds that rest and walk along the parkland and trails. Because of this, a city-posted speedlimit of 20 kilometres per hour (12 mph) is in effect on the trail.

Penguin statues on the Riverfront, Windsor

The first part of the park starts at the foot of the Ambassador Bridge, and contains some of the Odette Sculpture Park (now called Windsor Sculpture Park), and a parking lot for people to park their vehicles. The former name of this park was "Ambassador Park", a name now given to the park between the University of Windsor and the Sculpture Park. The park also contains two service centers, a drinking fountain, and a Vietnam War memorial. This park also connects to the Fujisawa Botanical Gardens, a gravel trail and grassed area still under conversion from railway bed, extending south to Wyandotte Street.

After the Caron Ave Pumping Station, the park transitions into the Dieppe Gardens, a beautiful and well-maintained garden and grassed area between the hotels along Riverside Drive, and the river. Many ships dock along the Gardens, and (Like Mill St. Park, Jackson Park, and the Sculpture Gardens), is a popular destination, especially for news crews. The park also contains several war memorials, as well as a monument dedicated towards peace (The UN Peace Memorial).

Shortly after Dieppe Gardens, the park quickly transitions into a large parking lot for visitors, as well as the large pavilion of Civic Terrace, where small concerts and the annual Busker Festival street performance takes place. It is also the home of the yearly Windsor-Detroit International Freedom Festival. The name of this park is, appropriately "Riverfront Festival Plaza", with the large open paved area named "Civic Terrace".

It also connects to City Hall Square via a smaller plaza and park across the street from Riverside Drive. in front of Festival Plaza are two large ramp structures that are currently being rehabilitated. They are the former decks for loading railroad cars onto ferries, to cross the river to Detroit. They are due to be open to the public by spring of 2007, and are a tribute to our former railroad service along the riverfront. There were similar docks just east of the Sculpture Garden, but they have since been removed, being converted into parkland. The City intends on having plaques about the decks and railroads installed (two are already installed, along with over 30 other plaques along the entire Riverfront Park system), along with benches for people to sit on and enjoy the scenery.