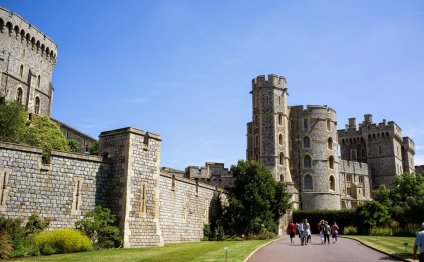 Windsor Castle is the oldest and largest inhabited castle in the world. It has been the family home of British kings and queens for almost 1, 000 years. It is an official residence of Her Majesty The Queen, whose standard flies from the Round Tower when she is in residence.

The Queen spends most of her private weekends at Windsor and takes up official residence for a month over Easter (March to April), known as Easter Court. The Queen is also at Windsor for one week each June, when she attends Royal Ascot and the service of the Order of the Garter.

Windsor is still very much a working royal palace. The Castle is used regularly for ceremonial and State occasions. It is here that The Queen often hosts State Visits from overseas monarchs and presidents. St George’s Hall makes a spectacular setting for a State Banquet, when a single table, stretching the length of the hall and seating 160 people, is decorated with porcelain, and silver-gilt from the Royal Collection.

Occasionally The Queen hosts a ‘dine and sleep’, when Her Majesty invites important figures, such as political leaders, Ambassadors, High Commissioners or the heads of Commonwealth nations, to have dinner at the Castle, before showing them a special display of items from the Royal Library. The guests then spend a night at the Castle and depart after breakfast the following morning.
St George’s Chapel within the Castle Precincts is the spiritual home of the Order of the Garter, the oldest order of chivalry in the world. Founded at Windsor by Edward III in 1348, its Knights still attend a Service of Thanksgiving in the chapel of their patron, St George, processing in their robes and insignia through the Castle Precincts. Today, the Order consists of The Queen, The Prince of Wales and 24 Knight Companions. There are also Royal Knights and Foreign or ‘stranger’ Knights. St George’s Chapel remains an active centre for worship, with daily services open to all.