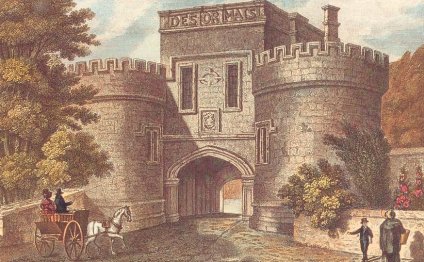 Castles and fortified houses can be found all over Britain. Impressive, oppressive, dramatic, romantic: who built these castles, and why?

Many fortified sites started off as Bronze or Iron Age forts, built as defensive positions against warring tribes and / or invaders. These were often built on high ground with commanding views over the surrounding countryside, and consisted of a series of ramparts and ditches. One of the most famous Iron Age fortifications is Maiden Castle near Dorchester in Dorset.

After the Roman Invasion, some hill forts were occupied and used by the Romans whilst others were destroyed. Although Hadrian's Wall cannot be considered a castle as such, it served the same purpose - keeping out the enemy! Hadrian's Wall was built by the Romans in AD122-232 and stretched 73 miles, coast to coast. There were military forts at 5 mile intervals along its length.

The arrival of the Normans in 1066 led to a new age of castle construction. Initially the sites chosen were in the towns and centres of population. Later castles often reused the ancient hill fort sites, as their situations in the landscape were still as relevant for the Normans as for the Iron Age peoples. The Normans also saw the merit of controlling the Roman road network which were still the main routes through the countryside, and so some castles were constructed at strategic points such as river crossings and crossroads.

The first Norman castles were motte-and-bailey castles, a wooden or stone keep set on an artificial mound called a motte, surrounded by an enclosed courtyard or bailey. This in turn was surrounded by a protective ditch and palisade.

These fortifications were relatively easy and fast to construct. The remains of these castles can be found throughout the countryside, mostly consisting of just the motte, bailey and ditches. Some stone built motte-and-bailey castles have survived intact; examples include the Tower of London and Windsor Castle which incidentally was built with two baileys.

The motte-and-bailey castle design began to fall out of favour in the 13th century and more and more castles began to be built in stone. Following 1270 and the Conquest of Wales, there was a flourish of castle building under Edward I in Wales and the Welsh borders. From the 14th century onwards, castles began to combine their defensive role with that of a fine residence or palace.

In Scotland there was little castle building until the late 12th century. By the 14th century the pele tower or tower house was a popular design, with over 800 being built in Scotland. This was a tall, square stone structure, fortified and crenelated, and often surrounded by a walled courtyard.

In the Tudor period when the threat of invasion was high, Henry VIII had a string of castles built stretching along the coast from Cornwall to Kent. Portland Castle in Dorset, Pendennis Castle and St. Mawes Castle in Cornwall, Calshot Castle in Hampshire, Deal Castle and Walmer Castle in Kent are some of the finest examples of these fortifications.

Pendennis Castle, Cornwall, one of the Henrician Castles

In 1642 the English Civil War broke out and many castles were brought back into use. It soon became clear that the medieval castles would be vulnerable to the new seige weapon, the canon. Existing defences were renovated and walls "countermured", or backed by earth, in order to protect them from cannon fire. After the Civil War, many castles were 'slighted' or destroyed and castle building declined as peace returned.

One of the best examples of how a castle can develop over the ages is Dover Castle in Kent. Originally an Iron Age hill fort, it still houses a Roman lighthouse and an Anglo-Saxon church which was probably part of a Saxon fortified settlement. After his victory at the Battle of Hastings in 1066, William the Conqueror strengthened the defences with a Norman earthwork and timber-stockaded castle. In use as a garrison from the time of the Norman invasion until 1958, tunnels were dug under the castle in the late 18th century. During World War II these same tunnels were used as the headquarters from which the Dunkirk evacuation was masterminded.

Kilkenny Castle And Its History