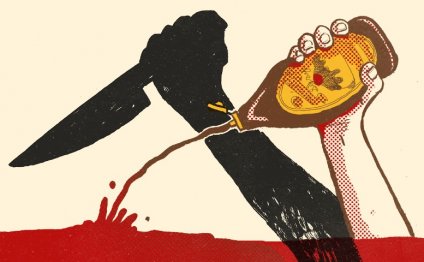 Some 2, 000 years ago, an army of Iron Age warriors was slaughtered in battle and then cast into a lake near the Alken Enge wetlands in East Jutland, Denmark. Archeologists have long suspected that the bodies were tossed in their watery mass grave as part of a religious sacrifice, but recent excavations at the site have revealed astonishing—and bloodcurdling—new details. Crushed skulls, bundles of bones, sacrificial jars and a string of pelvic bones on a stick suggest the warriors’ remains underwent a macabre ritual of postmortem dismemberment and desecration before being condemned to the deep.

The new discoveries at Alken Enge come on the heels of excavations from 2012, when a team of archeologists from Denmark’s Aarhus University, Skanderborg Museum and Moesgaard Museum found dozens of ancient skeletons that had been dumped in a lake near the town of Skanderborg around A.D. 1. Layers of peat had effectively entombed the mass grave, leaving hundreds of well-preserved artifacts and bones. Radiocarbon dating indicated the men had perished sometime around the birth of Christ, while weapons, hacked bones and crushed skulls suggested their death had been violent—most likely the result of a ferocious clash between Germanic tribes.

Archeologists returned to marshes at Alken Enge this summer, and have now announced that the circumstances surrounding the mass burial were even grislier than previously thought. New artifacts show that the bodies of the dead were not immediately buried after the fighting, but instead left to decompose on the battlefield before being ritualistically butchered and desecrated as part of a pagan ritual. “Our studies reveal that a violent sequel took place after the fallen warriors had lain on the battlefield for around six months, ” Project Manager Mads Kähler Holst said in a press release.

One of the most shocking finds is a series of four different men’s pelvic bones strung on a wooden stick. Holst said the team also uncovered “bundles of bones, bones bearing marks of cutting and scraping, and crushed skulls.” The scrape marks suggest that all the flesh and sinew was carefully stripped from the bones. Some were then sorted by type before being tossed into the waters of what was then part of Lake Mossø. “Most of the bones we find here are spread out over the lake bed seemingly at random, but the new finds have suddenly given us a clear impression of what actually happened, ” said Field Director Ejvind Hertz. “This applies in particular to the four pelvic bones. They must have been threaded onto the stick after the flesh was cleaned from the skeletons.” Along with the arrangements of bones, the team also found the remains of slaughtered animals and clay pots that may have once contained food sacrifices. According to Holst, these suggest the desecration held some spiritual significance. “We are fairly sure that this was a religious act, ” he said. “It seems that this was a holy site for a pagan religion—a sacred grove—where the victorious conclusion of major battles was marked by the ritual presentation and destruction of the bones of the vanquished warriors.”

While the researchers believe they know why the bones were desecrated, they know very little about the identity of the fallen warriors or the people who defeated them. The fight came at a time when the Roman Empire was rapidly advancing north into Germanic tribal lands. The invasion put the Roman legions on a collision course with fearsome Teutonic tribesmen, but it also led to infighting among local tribes as different groups tried to flee north. The archeologists have theorized that the bloody clash at Alken Enge may have been the result of one of these intertribal skirmishes.

Ancient Roman chroniclers later provided morbid accounts of Germanic warriors performing rituals with the corpses of their defeated foes. According to the historian Tacitus, a legion once encountered a site where tribesmen had massacred a group of Romans under the command of a general named Varus. Among piles of broken weapons and dead horses, they discovered “bleaching bones, scattered or in little heaps, ” human skulls “nailed prominently on the tree-trunks” and “savage altars” where the tribesmen had taken their captives to be slaughtered.

The battle Tacitus recounted took place near modern day Bremen, Germany, but researchers have long had ample evidence that sacrificial rituals were also conducted across Iron Age Scandinavia. The Alken Enge site sits within the Illerup Ådal river valley, which is also known as the “Holy Valley” because of its wealth of sacrificial locations. Archeologists have previously uncovered sacrificial offerings of pottery, wooden objects and animal remains in the area, but Alken Enge is the first holy site in Denmark to contain human bones on a large scale and in the gruesome style recounted in Roman lore.