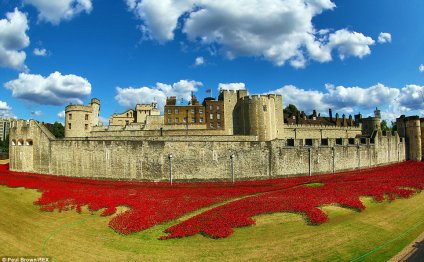 Who made the Tower of London?

The Tower of London in The Middle Ages

The Tower of London is one of the most famous buildings in London (although it is actually a number of towers and other buildings). It has stood guard over the city since Norman times.

The first part of the Tower of London to be built was the White Tower. It was probably begun in 1078 and finished by 1100. The new tower was designed by a Norman bishop called Gundulf, who was a famous builder.

About 1097 William Rufus built a stone wall around the White Tower to enclose it.

For centuries the Tower of London was used to hold important prisoners. The first was Rannulf Flambard the Bishop of Durham. When an arrow in the New Forest killed William Rufus in 1100 his brother became Henry I. The new king promptly arrested the bishop for simony (selling positions in the church for money).

However the bishop escaped. He was allowed certain privileges such as being able to buy his own food and wine. On 2 February 1101 the bishop generously invited his guards to a feast. When the guards became drunk he managed to squeeze through a window and climb down a rope. However the rope was not long enough and he had to drop the final distance. The bishop was met by friends who rowed him across the river and he then rode a horse to the coast where he escaped on a ship.

The Tower of London was greatly extended by Henry III (1216-1272). About 1220 Henry began building the Wakefield Tower and the Lanthorn Tower. (Lanthorn is an old word for lantern. In the Middle Ages a lantern was placed on this tower to guide ships sailing on the Thames).

Furthermore in 1255 Henry built an Elephant House for an elephant, which was given to him as a present by the French king. He already had a private zoo or menagerie at Woodstock in Oxfordshire and its exotic animals were moved to the Tower of London. The menagerie remained in the Tower of London until the 19th century.

Henry's son Edward I (1272-1307) continued his father's work. He built the Beauchamp Tower. Edward also built St Thomas's Gate. It had an entrance from the river. Originally it was called Water Gate but in time it became known as Traitor's Gate because so many people accused of treason passed through it. Edward I also built Byward Tower, Well Tower and Develin Tower. He also built another curtain wall around the existing curtain wall. So the Tower of London now had two concentric walls surrounding it.

Edward I also established a mint in the Tower of London. It finally closed in 1968.

The Cradle Tower was built in the late-14th century shortly before the Peasants Revolt.

In May 1381 an army of rebel peasants from Kent led by Wat Tyler marched on London. More rebels from Essex marched on the city from the east. The rebels entered London, helped by sympathizers who opened the gates for them and the king and his minister took refuge in the Tower of London. Finally the king went out to negotiate with the rebels. While he was away some angry peasants entered the Tower and ransacked it. The Archbishop of Canterbury and the Treasurer Sir Robert Hales were both beheaded.

However the king eventually persuaded the rebels to disperse by making them promises, which he did not keep.

In the late 15th century England suffered a series of civil wars known as the Wars of the Roses. During them King Edward VI was murdered in the Tower of London in 1471.

However the most infamous murders in the Tower were those of two young princes. When Edward IV died in 1483 he left a 12-year-old son, Edward V and his 9 year old brother Richard. Since Edward was too young to rule his uncle Richard was appointed Protector. However Richard sent the boys to the Tower. He also declared them illegitimate and made himself king. The two boys disappeared. Obviously they were murdered but it is not certain who killed them.

The Tower of London has always been guarded by armed men. However the Yeomen Warders were founded by Henry VII in 1485.

The Tower of London in The 16th Century and 17th Century

The Tower of London is, of course, famous for its many executions. Several took place during the 16th century. One of Henry VIII's first acts was to arrest his father's tax collectors Edmund Dudley and Sir Richard Simpson. Both were held in the Tower and later executed. In 1535 Bishop Fisher and a man named Thomas More

met the same fate. Anne Boleyn followed them in 1536. Thomas Cromwell was sent to the Tower and executed in 1540. Then in 1542 another of Henry's wives, Catherine Howard was beheaded.

In 1546 a woman named Anne Askew was tortured then killed in Smithfield for her Protestant beliefs. She was the only woman to be tortured in the Tower of London.

Meanwhile in the early 16th century the Tower's defenses were refurbished and designed to hold guns. Furthermore the Queens House was built in the 1530s.

The Chapel of St Peter ad Vincula (which means St Peter in chains in Latin) was rebuilt by Henry VIII in 1520.

Meanwhile during the 16th century England was rocked by religious changes. Henry VIII made himself head of the Church of England in 1534. His son Edward VI (1547-1553) introduced Protestantism. However it soon became clear that the young king would not live long and his sister Mary who was a Catholic and who would restore Catholicism would succeed him. To try and prevent that the king named Henry VIII's great-niece Lady Jane Grey as next in line to the throne. Edward agreed to this but after his death many people supported Mary and she easily captured Lady Jane. The unfortunate young woman was beheaded on 10 February 1554.

In February 1554 Mary suspected he half-sister Elizabeth was involved in a rebellion and imprisoned her in the Tower of London. However Elizabeth was released in May 1554.

In 1603 Sir Walter Raleigh was convicted of treason and sent to the Tower. He was held there for 13 years. Raleigh used the time to write a History of the World. He also experimented with chemistry. However in 1616 he was released because the king wanted him to lead an expedition to South America. The expedition was not a success and in 1617 Walter Raleigh was rearrested and sent back to the Tower. He was beheaded on 29th October 1618.

Furthermore during the reign of Charles II members of the public were allowed to visit the Tower of London for the first time.

Video on topic: Who made the Tower of London?

Tower of London-Who Goes There