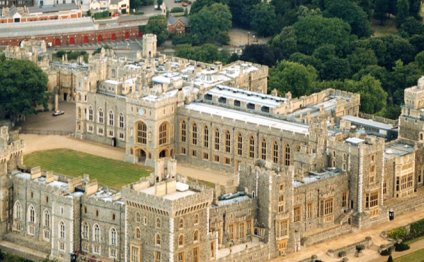 On September 10, 1637, Arthur Smith patented 1, 450 acres in Isle of Wight County. In 1742, Arthur Smith III died and left his estate to his son, Arthur Smith IV. It is estimated that the manor house was built in the middle of the 18th century. It is unknown how the name Windsor Castle became attached to the property.
The manor house is constructed of brick with two large chimneys at each end and covered with stucco. There are two porches, the front facing the river.

Two very large rooms are on each side of a wide central hallway. There is a basement with a kitchen and storerooms; bedrooms are located upstairs.
The original colonial kitchen was separate from the house, a common arrangement because of likelihood of kitchen fires.
Other historic structures on the property are the smokehouse, two mid-19th century granaries, two 20th century granaries, stables and log corncrib.