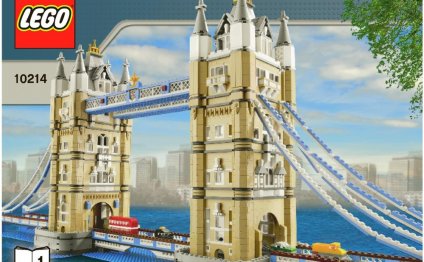 10214 Tower Bridge is a Exclusives set that was released on October 1, 2010. It was designed by Jamie Berard, and is his largest set produced to date, a grand total of 4, 287 pieces.

This set is modeled after the real Tower Bridge in London, meaning that the middle part of the bridge opens up. It mostly contains tan pieces, with also some blue and white pieces as the supports for the bridge. The set measures 102 cm by 42 cm by 26 cm. It contains not only the bridge itself, but also a mini-scale double-decker bus, a yellow truck, black taxi, and green car. It also includes 5 16x32 (half size) baseplates, all coloured blue. The set contains no minifigures, as it is not minifigure-scale. At 4, 287 pieces, it is the third largest LEGO set ever released.

Tower Bridge (built 1886-1894) [1] is located on the River Thames in the East-end of London and was designed by Architect Sir Horace Jones. It is named Tower Bridge (although many call it "The" Tower Bridge), not for it's own towers but for it's proximity to the Tower of London. It officially opened on the 30th June, 1894 by soon to be King, Edward VII. Tower Bridge also featured the 2012 Olympic rings when London hosted the Olympic games, the rings were suspended in the centre of the upper walkways, and hinged to swing upwards when the bridge's central span was raised.

Unlike many landmarks in the city, Tower Bridge survived the Blitz unscathed. This has been ascribed to the possibility that it was used as a marker to line up German bombing raids.

Construction started in 1886, and took eight years to complete. Over 70, 000 tons of concrete were provided for the massive piers being sunken into the riverbed for support, and 11, 000 tons of steel were used for the framework of the bridge. The total cost of construction was £1, 184, 000 (£100 million today).