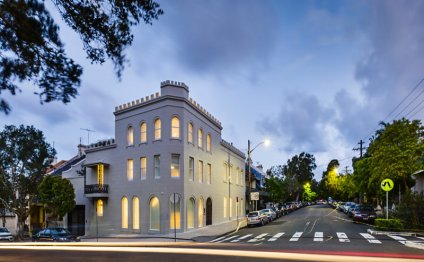 The Paddington home price record was smashed on Tuesday night when a converted hotel sold for about $13 million.

In 2012 the owners briefly listed the original facade and a large hole in the ground for more than $5.5 million but it didn’t sell.

The trophy residence was listed last month with a guide of more than $13 million by Sotheby’s International’s James McCowan​ and Ballard’s Will Manning, both of whom were gagged by confidentiality orders from commenting on the sale

Lucy and Ben May, who own the Manly Wharf Hotel, sold their designer home in Newport last August for .25 million, settling on the sale this month to the Hansen family.

Their new residence has been almost three years in construction before it was offered for sale by downsizing interior designer Rita Polovin​ and her husband, former restaurateur Peter Polovin.

The four-storey home sits behind the original hotel’s heritage facade and includes basement garaging for five cars, a lift, a striking sculptural staircase, movie theatre, access to a rooftop terrace, glass-fronted plunge pool and five bedrooms, all with en suites.

The entry level is dedicated to open-plan living and dining areas wrapped around a private, north-facing courtyard.

The Windsor Street property previously traded in 2009 for $4.3 million when sold by hotelier Marcus Levy and his wife, Vanessa Sanchez-Levy, and her brother, developer Chris Sanchez.

The Windsor Castle Hotel in Paddington in 1969. Photo: Sydney, A Book of Photographs, David Mist

In 2012 the Polovins briefly listed what was then the original facade and a large hole in the ground for more than $5.5 million with DA-approved plans for the new residence but took it off the market to undertake the project themselves when it didn’t sell.

Tour to the Great Kitchen at Windsor Castle

The Windsor is an ancient inn, and thankfully a 2013 refurb was sympathetic to its many charms. It’s clad in aged wood the…

Contributed by People in story: The Queen Mary s hospital for Children in Carshalton Location of story: Carshalton, London…