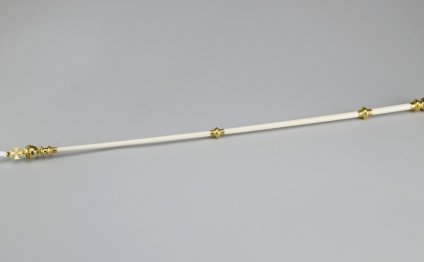 The Crown Jewels are displayed at the Jewel House in the Tower of London and can be viewed there by the public.

The coronation of a new sovereign is one of the monarchy's most glittering pageants, staged in the gothic splendour of ancient Westminster Abbey, where every King and Queen of England, with the exception of Edward V and Edward VIII, has been crowned since King Harold II in 1066. This time honoured ritual emphasizes the continuity and majesty of the British monarchy.

The oldest items in the present coronation regalia date from the Restoration, when they were made for the coronation of King Charles II. The original Crown Jewels were destroyed by Oliver Cromwell following the execution of Charles I in 1649, as they were then considered to be redundant. In an appalling act of historical vandalism, Cromwell had the entire collection sold or melted down and made into coin.

Many of these irreplaceable and historic pieces, collected over the centuries, were Saxon or Medieval and included Alfred the Great's State Crown and the eleventh century crown of Queen Edith, wife of Edward the Confessor. There is no certain depiction of the most precious item of the collection, the Crown of St.Edward the Confessor, ( re-named King Alfred's crown after the Reformation).

We know the appearance of the State Crown of Henry VII, which shared their fate, as it is depicted in some of the portraits Charles I, by Daniel Mytens and Van Dyck. There were also various sceptres, swords, coronets, rings and an Anglo-Saxon comb, Some of the pieces were probably reclaimed burial regalia, including those stripped from the rich shrine of Edward the Confessor in Westminster Abbey by Henry VIII. Various medieval garments used in past coronation ceremonies were also sold off at the time, an irreparable loss.

The only item in the present collection to survive the Commonwealth is the golden Ampulla and spoon.

The Ampulla is used in the coronation ceremony to annoint the monarch's head palms and breast with holy oil.

The Imperial Crown of State contains the principal surviving historic jewels, which were recovered at the time of the Restoration. These include Edward the Confessor's sapphire, which is set in a Maltese cross at the top of the crown. This sapphire was once part of a ring owned by Edward the Confessor, which was buried with him in 1066. In 1101, when his shrine was opened and the ring removed, the sapphire was re-set in a crown worn by Henry I.

The ruby which adorns the centre of the Crown of State has a rich and dramatic history. It once belonged to a King of Granada, who was murdered by Pedro the Cruel, King of Castille. He presented it to Edward, the Black Prince, in gratitude for his military assistance at the Battle of Navaretto in 1367. It was inherited by Edward's son, Richard II. Richard had it in his possession when he surrendered to his cousin, the future Henry IV, at Flint, Wales in 1399. Henry later usurped the throne and Richard was murdered. Henry's son, Henry V, wore this ruby in the crown he wore around his helmet at the Battle of Agincourt, a bejewelled gold fleuron was struck off this same crown during the battle and lost. The ruby was similarly worn in the crown of Richard III at the Battle of Bosworth in 1485. When Richard was killed during the fighting it famously rolled under a hawthorn bush to be retrieved by Lord Stanley and placed on the head of the victorious Henry Tudor.

Morrissey - The jewel in The Crown (Rockumentary) I.DEL