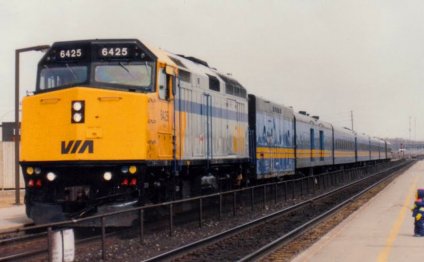 Two women from Strathroy-Caradoc, Ont. died during a collision between a car and a Via train Monday, southwest of London.

The collision happened at a rail crossing on Melbourne Road.

The OPP says a car was driving south on Melbourne Road and didn't stop at the rail crossing.

Melbourne Road remained closed off at 5 p.m. after a vehicle collided with a Via train earlier in the day. (Stacey Janzer/CBC )

Melbourne Road and a stretch of the rail tracks in that area had been closed for most of the day as police investigated.

OPP Sgt. Dave Rektor said the debris was scattered over approximately 250 metres and there was extensive damage to the vehicle.

"Based on the evidence gathered by investigators on the scene, we'll be able to have a better idea of what transpired, " Rektor said. "We still don't know a lot, there are more questions than answers right now and we'll have to piece that together.

Investigators remained on scene where a train and vehicle collided on April 4, 2016. (Ina Dodge/ Provided )

Via Rail issued the following statement:

Train 72, en route from Windsor to Toronto struck a vehicle at a level crossing in the Glencoe area, some 30 km east of Chatham at 10:34 a.m. today.

There were 88 passengers on board. No reports of any injuries to them or to any crew members.

Local police are on site and investigating.

As per standard protocol, replacements for the locomotive engineers are being sent to the train. They are expected to arrive shortly, and the train will then continue its trip to London and Toronto.

No other Via trains [are] affected at this time.

The Transportation Safety Board of Canada (TSB) sent a team of investigators to the scene. It will gather information and assess the incident.

Riding VIA Rail Train #70 between London and Windsor ...

London Waterloo to Windsor by train.