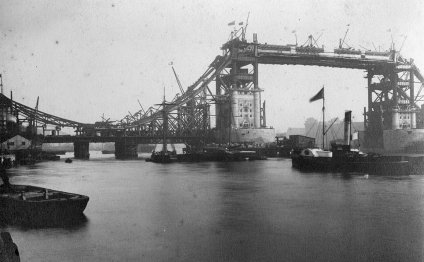 When was the London Tower Bridge built

London Bridge was originally the only crossing for the Thames but as the population of London grew, new bridges were needed. At this time the east end of London was a thriving, densely populated port being served by hundreds of boats including Thames Sailing Barges. By the 19th century, journeys for pedestrians and vehicles were being delayed by hours and it was clear that London desperately needed a new bridge.

A huge challenge faced the City of London Corporation – how to build a bridge downstream from London Bridge without disrupting river traffic activities. A special committee formed in 1876 opened the design for the new crossing to public competition. Over 50 designs were submitted for consideration, many of which are on display at Tower Bridge Exhibition. It wasn’t until October 1884 however, that Horace Jones, the City Architect, in collaboration with John Wolfe Barry, offered the chosen design for Tower Bridge as a solution.

It took 8 years and 5 major contractors to complete the new bridge with a total of 432 construction workers working on the project.

How did they build Tower Bridge?

Two massive piers were sunk into the river bed to support the construction and over 11, 000 tons of steel provided the framework for the Towers and Walkways. The steel was clad in Cornish granite and Portland stone and designed in a gothic style that gives the Bridge its recognizable appearance

How does Tower Bridge Work?

When it was built, Tower Bridge was the largest and most sophisticated bascule bridge ever completed (“bascule” comes from the French for “see-saw”). These bascules were operated by hydraulics, using steam to power the enormous pumping engines which can still be seen today in the Tower Bridge exhibition. The energy created was stored in six massive accumulators, as soon as power was required to lift the Bridge, it was always readily available. The accumulators fed the driving engines, which drove the bascules up and down. Despite the complexity of the system, the bascules only took about a minute to raise to their maximum angle of 86 degrees.

The bridge was built for vessels like our very own Sailing Barge Will. The sail trade sustained London for centuries with vessels such as Thames Sailing Barges coming and going with all manner or cargoes. With the high masts and rigging this entailed, the new bridge for London had to be able to accommodate this height. The Victorian engineers and architects decided against a suspension bridge and built the Tower Bridge with rising bascules that we recognise today. Sailing Barge Will till this day can still open the bridge due to her tall mast – why not join us and open this iconic London landmark exclusively for your guests? Trust us, it’s quite something!

Video on topic: When was the London Tower Bridge built