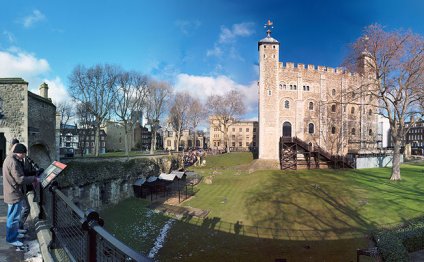 Most visitors spend in the region of 2-3 hours inside the Tower of London.

Beefeater at Tower of London

Hop On, Hop Off Buses & River Services: - All of London's hop on, hop off sightseeing buses cross Tower Bridge and stop in front of the Tower of London. Tower Pier is on the river immediately in front of the Tower of London and the river services, especially routes to the London Eye and Westminster are very popular and rewarding. The Hop on Hop Off sightseeiing buses include these river routes in their tickets.

Worth Knowing: - Tower Bridge in front of the Tower of London is still a working bridge and in the summer months can open up to 5 or 6 six times a day, though openings are erratic and the bridge may not open for several days. You can get the times and days Tower Bridge opens from the Tower Bridge official web site.

Ticketing is straight forward with concessions for children, seniors and family tickets.

Your ticket includes access to the Tower and the Crown Jewels display, exhibitions including Coins and Kings and Line of Kings, plus the Yeoman Warder guided tour, live historical re-enactments, White Tower tour and children's activity trails.

The main queues are not to enter the Tower of London, but to access the Crown Jewels after you gain entry.

For the most streamlined visit prepurchase your tickets and be at the entrance at opening time.

Save Money! - Combine Tower of London With Up To 5 Other Major London Attractions

For a much wider range of attractions to combine into a money saving package check out Discount London.

Other royal palaces and castles in and around London include:

Buckingham Palace: has served as the official London residence of Britain's sovereigns since 1837. Today it is the administrative headquarters of the Queen and is the main venue for the Changing of the Guard ceremony.

: A rich royal history. Kensington Palace can boast of being the birth place of Queen Victoria and the official London residence of the Duke and Duchess of Cambridge, not to mention being the home of a host of Georgian monarchs and royalty including Princess Diana who have all left their mark on this impressive Palace. Explore the vast state apartments which contain an array of beautiful paintings and sculptures.

The Castle is the largest inhabited castle in the world and the oldest in continuous occupation. The imposing towers and battlements of the Castle loom large from every approach to the town, creating one of the world's most spectacular skylines.

: For almost 200 years, Hampton Court Palace was at the centre of English court life, politics and national history. Its most infamous resident was Henry VIII.

Today Hampton Court is an easy day trip for all visitors to London in vast grounds next to the River Thames.

The hop-on, hop off sightseeing buses are an excellent first day in London quickly getting you up to speed and orientated with the layout of London and your guide pointing out sights and destinations you might have not previously considered visiting.

But most visitors to London will have their own "must see" list of attractions.

So why not save some money and purchase your hop-on, hop off sightseeing bus tickets and your "must see" attractions as a package. You don't have to use the attraction tickets on the day you use the sightseeing bus either.

Appearances are deceptive, the appearance of the bridge is in harmony with the Tower of London, but the bridge is not ancient like the Tower Of London, it was built only about 120 years ago.

The bridge is not a museum piece it still performs its originally function of providing a public road across the River Thames and letting tall ships pass through. As a pedestrian you can walk across the bridge at any time, there are no tolls or fees. All of the popular hop on, hop off sightseeing buses cross Tower Bridge before stopping at the Tower of London.

The bridge still opens to let shipping through, the central part of the highway between the towers of the bridge lifting up.

Tower Bridge only opens when a ship has reserved an opening at a specific time, it doesn't open to a regular schedule. By the nature of this arrangement openings are irregular, it may open 5 or 6 times one day then not open at all for several days. The bridge can open at any time.

Once you have seen the bridge, it is so different to anything else you have witnessed you may well be eager to learn more.

The Tower Bridge Exhibition is actually located within Tower Bridge itself. Not only do you learn everything there is worth knowing about Tower Bridge, its history, how it was built and operates etc you also explore the inside of the bridge.