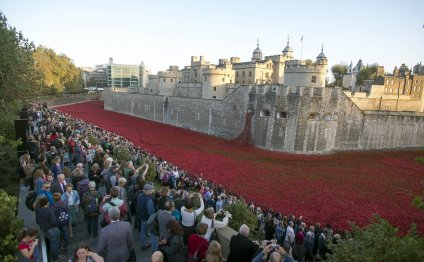 The Duke of Wellington was Constable of the Tower from 1826 to 1852. Under his invigorating leadership the increasingly smelly and sluggish moat was drained and converted into a dry ditch.

The Grand Storehouse was destroyed by fire in 1841. The Duke arranged to clear the rubble and started work on a huge new barracks, to accommodate a thousand men.

London 1840s was the scene of rallies and disturbances by Chartists demanding electoral reform. The Tower exerted its traditional role of state power over the people, probably for the last time.

More defences were constructed, including a huge brick and stone bastion that finally succumbed to a Second World War bomb, but the Chartist attack never materialised.

It was also at the beginning of this century that many of the Tower’s historic institutions departed. The Royal Mint was the first to move out of the castle in 1812, followed by the Menagerie in the 1830s, which grew to become London Zoo. The Office of Ordnance was next to leave in 1855 and finally, the Record Office relocated in 1858.

An increasing interest in the history and archaeology of the Tower led to a process of ‘re-medievalisation’ in an attempt to remove the unsightly offices, storerooms, taverns, and barracks and restore the fortress to its original medieval appearance.

The way the Tower looks today is largely thanks to a 19th-century fascination with England’s turbulent and sometimes gruesome history.

In the 1850s, the architect Anthony Salvin, a leading figure in the Gothic Revival, was commissioned to restore the fortress to a more appropriately ‘medieval’ style, making it more pleasing to the Victorian eye – and imagination. Salvin first transformed the Beauchamp Tower to make it suitable for the public display of prisoners’ graffiti, refacing the exterior walls and replacing windows, doorways and battlements.

Romanians steal £350 in coins from Tower of London moat