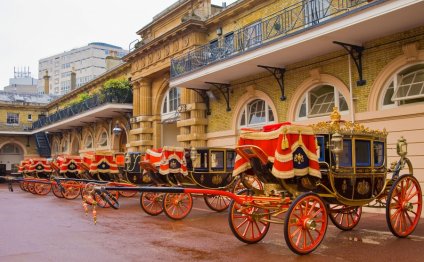 The word castle comes from a Latin word meaning fortress.

The official London residences of the English Sovereigns, from Henry VIII to the present day, have been:

Interesting fact:
The only access to St James's and Buckingham Palace before 1841 was through Horse Guards: The Mall was closed at both ends until the opening of Trafalgar Square in that year.

Buckingham Palace is the Queen's official and main royal London home, although the Queen regularly spends time at Windsor Castle and Balmoral in Scotland.

We have now created a special page with photographas and information on Buckingham Palace. Click here to go there

Windsor Castle is an official residence of The Queen and the largest occupied castle in the world. The castle was the inspiration for the Royal family's surname.

William the Conqueror built the castle in 1080 and it has remained a royal palace and fortress for over 900 years. Windsor is the oldest royal home in Britain and, covering 13 acres, it's the largest castle in the world that is still lived in.

Each year, the Order of the Garter ceremony is held at Windsor Castle, and the Queen occasionally hosts a "dine and sleeps" for politicians and public figures.

Balmoral Castle is the private residence of The Queen. It has remained a favourite residence for The Queen and her family during the summer holiday period in August and September. The Castle is located on the large Balmoral Estate in Aberdeenshire, Scotland.

Some 85, 000 people visit Balmoral each year, and the estate maintains and restores footpaths throughout the property for visiting hikers.

Founded as a monastery in 1128, the Palace of Holyroodhouse in Edinburgh is The Queen's official residence in Scotland. It was also the home of many Scottish royals.
The Queen holds receptions, state functions, and investitures within its walls, and each year during Holyrood Week Queen Elizabeth and Prince Philip invite 8, 000 Scottish guests to the Garden Party.

The Royal family’s private country retreat in Norfolk. Every Christmas is spent at Sandringham House, which has been the private home of four generations of sovereigns since 1862.

Kensington Palace was the favourite residence of successive sovereigns until the death of George II in 1760.
When William III bought the Jacobean mansion in 1689 it was known as the Nottingham House, and during his ownership he outfitted it for royalty. It was the birthplace and childhood home of Queen Victoria and her primary residence until she moved into Buckingham Palace.
Kensington Palace was the London residence of the late Princess Diana.

Built between 1532 and 1540 by Henry VIII. St James Palace was the official residence of the British Sovereign until the death of William III in 1837. Since then Buckingham Palace.

Edward the Confessor made the Palace of Westminster the first official London residence. It is now the seat of British democracy. It is where the UK government is. The Palace contains over 1, 000 rooms, the most important of which are the Chambers of the House of Lords and of the House of Commons.

In 1529, Henry Vlll got fed up with Westminster Palace and built himself another one which he called Whitehall Palace. It covered 23 acres and it was the official royal residence until it burned down in 1698. It was rebuilt as government offices.

The palace was a residence for Mary I and Elizabeth I, Charles I, William III and Mary II. Find out more about the Tower of London

Queen allows tour of Buckingham Palace ahead of major ...