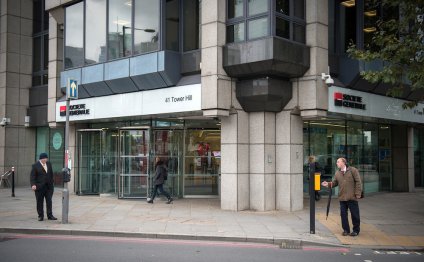 Societe Generale SA is considering selling its London headquarters this year after the bank agreed to lease new offices in the Canary Wharf financial district, according to three people familiar with the matter.

The bank’s office building in the Tower Hill district in the City of London and an adjoining parking lot are valued at about 100 million pounds ($141 million), the people said, asking not to be identified because the matter is private. Broker Savills Plc has been appointed to advise the bank on its options, the people said. Savills and Societe Generale declined to comment.

A lack of office construction in the City of London after the financial crisis has resulted in the vacancy rate falling to its lowest in 14 years as companies compete for space. That’s prompting some occupiers to move east to the cheaper Canary Wharf district. Societe Generale will lease 280, 000 square feet (26, 000 square meters) of office space in a new building being constructed by Canary Wharf Group Plc that’s due for completion in 2019.

Rents for the best space in Canary Wharf were about 45 pounds a square foot at the end of last year, compared with 70 pounds in the City of London, according to data compiled by broker Colliers International Group Inc.