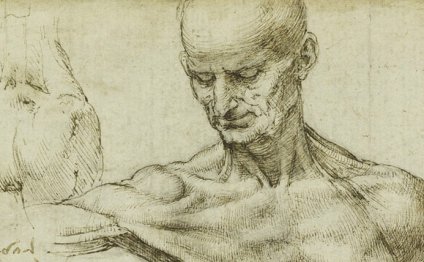 The Royal Collection is particularly strong in Old Master drawings, especially by Italian artists, and Victorian watercolours. Most famous are the groups of around 80 portrait drawings by Hans Holbein the Younger and 600 drawings by Leonardo da Vinci, including studies of anatomy, landscape, water and natural history. From the Italian Renaissance there are also important groups by Raphael and Michelangelo, including several of the latter’s famous ‘presentation drawings’.

The Italian Baroque drawings are principally of the Roman and Bolognese schools, with large groups by the Carracci, Domenichino, Maratti, Sacchi, Sassoferrato, Della Bella, Bernini, Castiglione and Guercino. The collection also contains most of Cassiano dal Pozzo’s encyclopaedic ‘Paper Museum’. The 18th-century Italian drawings are mainly Venetian, with matchless groups by Canaletto, Piazzetta, and Sebastiano and Marco Ricci. There are also significant numbers of Dutch, Flemish, German and French drawings, mainly of the 16th and 17th centuries, including groups by Poussin and Claude. Eighteenth-century English drawings include fine series by Paul and Thomas Sandby (particularly relating to Windsor Castle) and William Hogarth, whilst the thousands of 19th-century watercolours relate principally to the reign of Queen Victoria and to her family and travels.

The print collection includes large groups by Dürer, Hollar, Canaletto, Della Bella, Silvestre, Callot, Hogarth and Rowlandson, and collections of prints after the works of Raphael, Reynolds and Landseer. Most of the other prints are organised by subject-matter, including royal portraits of all countries, non-royal British portraits, topography, and prints of historical events.

The British architectural drawings in the collection are almost exclusively connected with the royal residences. At the core of the extensive holdings of maps is George III’s military collection, dealing with military operations throughout the world before .1820. Online catalogues of this material are currently in preparation.

The greater part of the drawings, watercolours and prints are housed in the Print Room at Windsor Castle, the present layout of which was created by Prince Albert in the 1850s. Assembled over the last five centuries, the collection was principally shaped by just three monarchs. Charles II laid the foundation of the Old Master drawings, acquiring mainly Renaissance works (including the Holbeins and Leonardos).

Out of the Ashes Watercolours of Windsor Castle The Royal ...