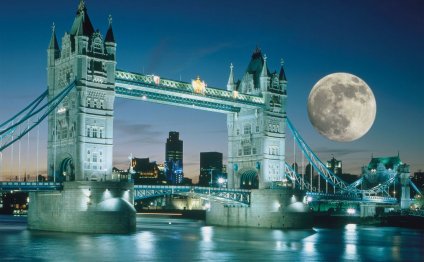 The bridge originally linked Iron Gate, on the north bank, with Horselydown Lane, on the south. Those roads are now known as Tower Bridge Approach and Tower Bridge Road, respectively.

Prior to the opening of the bridge, those wishing to cross the river here would have used the Tower Subway - a 410-metre tunnel. Once used by one million people a year (each paid half a penny to do so), it closed to pedestrians in 1898 and is now used for water mains.

The bridge initially faced criticism from architectural experts. H.H. Statham wrote in 1916 that it represented "the vice of tawdriness and pretentiousness". F Brangwyn and W.S. Sparrow's Book of Bridges (1920) labels the structure "absurd".

A popular myth states that Robert P. McCulloch, the US entrepreneur, purchased the old London Bridge (which was later rebuilt at Lake Havasu City, Arizona) in the belief that it was the more famous Tower Bridge.

Tower Bridge on the day it opened (Photo: Getty)

The high-level, open-air walkways between the two towers were once a haunt for prostitutes and pickpockets, and closed in 1910. They reopened in 1982 with an admission fee.

In 1952, the bridge began to open while a double-decker bus was still on it. The number 78, which was being driven by Albert Gunton, had to accelerate and jumped a small, three-foot gap. He was awarded £10 for his bravery.

A bus once jumped a three-foot gap to cross the bridge (Photo: Getty)

The Hawker Hunter Tower Bridge incident in 1968 saw Flight Lieutenant Alan Pollock, angry at the lack of aerial displays planned to mark the 50th anniversary of the RAF, take matters into his own hands. He took his Hawker Hunter jet on an unauthorised low-level flight, circling the Houses of Parliament three times, dipping his wings over the RAF Memorial and flying under the top span of Tower Bridge. "It was easy enough to fly over it, but the idea of flying through the spans suddenly struck me, " he said. "I had just ten seconds to grapple with the seductive proposition which few ground attack pilots of any nationality could have resisted."

Ships always have right of way. That fact was made clear in 1997 when Bill Clinton's presidential motorcade was split crossing Tower Bridge to allow the Thames sailing barge Gladys to pass as scheduled. "We tried to contact the American Embassy, but they wouldn't answer the phone, " said a Tower Bridge spokesman.

A replica of Tower Bridge can be found in the Chinese city of Suzhou. It has a cafe inside offering "English-style coffee".

How long it takes to raise each half (bascule) of the bridge's central stretch to allow large ships to pass.

Number of construction workers it took to build the bridge

The number of bricks used, along with 2 million rivets and 22, 000 litres of paint.

Maximum angle each bascule can be raised.

Height (above water) of the pedestrian walkways at high tide

Height of each of tower

Total length of the bridge in feet

Approximate number of times the bascules are raised each year. 24 hours' notice is required, but there is no charge for vessels.