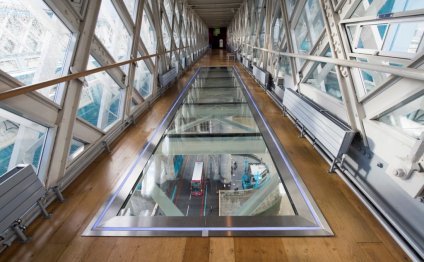 Tower Bridge has to be one of the most famous bridges in the world.
It is certainly a unique spectacle and well worth extending your experience of Tower Bridge beyond the obligatory snapshot
Tower Bridge is adjacent to the Tower of London, another “must see” for the first time visitor to London and visiting both in one day makes a great combination.
Plan your day around one of the scheduled openings of Tower Bridge and you may well have a perfect day to remember.
On either side of Tower Bridge are St Katherine’s Dock on the north side, now a marina lined with restaurants and bars and on the south bank Butlars Wharf, another area of riverside restaurants. Perhaps a great way to round off the day with ameal overlooking the river and Tower Bridge.

Despite its appearance, Tower Bridge is only about 120 years old. It’s industrial age build masked by Portland Stone to complement the historic Tower of London adjacent.

The bridge is still a public highway and there are wide pavements each side of the road for you to walk across, there is no toll or payment to do this.
For the first time visitor I would recommend arriving by either one of the open top hop on hop off sightseeing buses or one of the river services.
All of the hop on, hop off sightseeing buses drive across Tower Bridge before stopping outside the Tower of London.
City Cruises have boats geared to the leisure visitor. They are not the fastest river service available, but offer open air panoramic views and a commentary. The most popular route is to join the boat at the London Eye by Westminster Bridge and get off at Tower Pier in front of the Tower of London and Tower Bridge. Most boats will pause for a photo opportunity below Tower Bridge before docking at Tower Pier.
If you buy a ticket with the Original London Tour bus the City Cruises boat is included.
The speediest direct route for most people will be by the London Underground to Tower Hill, at the north end of Tower Bridge.

The Tower Bridge Exhibition
Once you have walked the bridge, viewed the bridge or seen the bridge opening and closing you may well be entranced enough by the spectacle to want to know more about the bridge.
The Tower Bridge Exhibition is the answer for you.
The horizontal structures between the two towers above the main roadway of the bridge were originally put there so pedestrians could walk across the bridge when the bridge was opening for shipping. The fact that people preferred to stay at ground level and watch the spectacle meant that the facility was quickly withdrawn from the public through lack of use.
So the exhibition is imaginatively located within the bridge. You climb and descend the towers by lift and the core of the exhibition is on the high level walkways themselves.

By the time you have completed your visit to the Tower Bridge Exhibition you will know everything worth knowing about the bridge and more.
Pictures and video speak louder than words. The video below will give you a good flavour of what to expect when you visit, helping you make an informed decision.

If you wish to purchase tickets you can do so on the day or purchase on-line in advance.