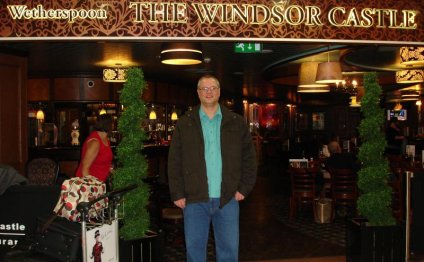 On a freezing Tuesday night we headed towards Heathrow, no not to take a flight, but to stop by the wonderful Windsor Castle pub in Hounslow, to check out the fun and frivolities on offer.

It was owner-manager Steve’s birthday and he was in for a big surprise in the shape of two burly strippers, the sexy Kieran Kaine and Rob Night, who were billed to give us an eyefuy.

The night was hosted by Misty Lee, and it soon turned into a great one at that as the locals were getting into the swing of things in no time, eagerly awaiting the two buff boys to reveal all.

Misty Lee was selling fake dollar bills to the punters to give to the gogo boys of their choice, who were shaking their plentiful booties on the bar rather energetically despite a freezing cold Tuesday outside, but the heat was on the rise in the Windsor Castle.

Finally, the wait was over and the highlight of our evening, strippers Kieran and Rob were announced – all I can say was it was well worth the wait! The two boys came out and put on a jaw-dropping, delicious performance for us.

It might have been sub-zero outside, but it was steaming hot in here! The Windsor Castle presents ‘Flesh Night’, a weekly amateur strip contest every Tuesday where you can win up to £100! Check it out.